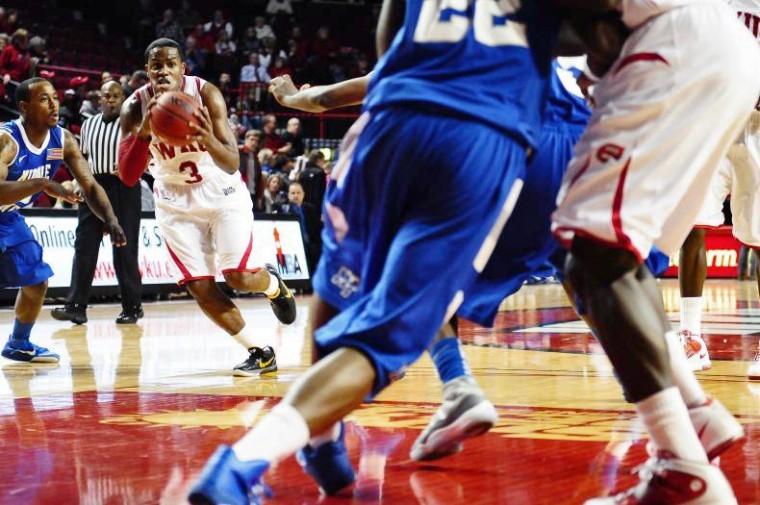 It’s becoming that time of year when teams start to do some scoreboard watching.

WKU is no different.

The Toppers find themselves in third place in the Sun Belt Conference’s East division, a long fall from the first-place finish the league projected in the preseason.

But Head Coach Ken McDonald said they’re not concerned with what was expected to happen, and are instead focusing on what they can control.

“There’s a lot of ramifications of the next two weeks, with how we play and whether we’re able to put some wins in that win column, to how we finish the season up and what that means for the Sun Belt Conference Tournament coming up,” McDonald said. “The guys are excited.”

Florida Atlantic has a tight grasp on the top spot in the East division, standing at 10-1 in the league heading into a Thursday’s game at Denver.

But the Toppers are still in striking distance of second-ranked Middle Tennessee and the first-round bye in the Sun Belt tournament that comes with the No. 2 seed.

WKU hosted the Blue Raiders on Thursday night and heads to Murfreesboro, Tenn., on Feb. 26 for its regular season finale.

“There’s a lot of teams that could shift in the standings,” McDonald said. “We just want to finish strong and compete.”

The Toppers are moving toward the tail end of what has been a lengthy home stand. They’ll host North Texas at 3 p.m. Saturday and then play Florida Gulf Coast at 7 p.m. on Monday in Diddle Arena.

The North Texas game will air on ESPN2, and WKU will have a reunion of its 1970-71 Final Four team at halftime.

The Toppers lost to MTSU in last year’s ESPN game, and senior forward Steffphon Pettigrew said the team will have to be in the right state of mind to make a good national impression Saturday.

“That’s just a mental thing,” Pettigrew said. “You’ve got to be hyped. I come ready to play. I’m not saying I’m the only one, but when you come to play in front of the home crowd, you’ve got to be ready.”

Senior forward Sergio Kerusch said he thinks the Toppers have learned how to better mentally prepare over the past few weeks, as several big wins have reminded them what a good feeling a victory can be.

“Winning has never been not fun,” Kerusch said. “When we win, it’s amazing because guys are being unselfish. In some of our losses, we got away from that team concept. We’re collectively coming together on and off the court, and it’s showing on the court.”

McDonald said he just hopes that it continues to show for the final six games of the regular season and beyond.

He said every team in the Sun Belt has plenty of work left to do, but WKU’s coaching staff has been preaching that the Toppers hold their own fate in their hands.

“If you take out the games and take out the days off you’re going to have, you’re really coming down to a very small amount of days,” he said. “We have to stay focused, stay together and understand that we can get so much better at a lot of things.”