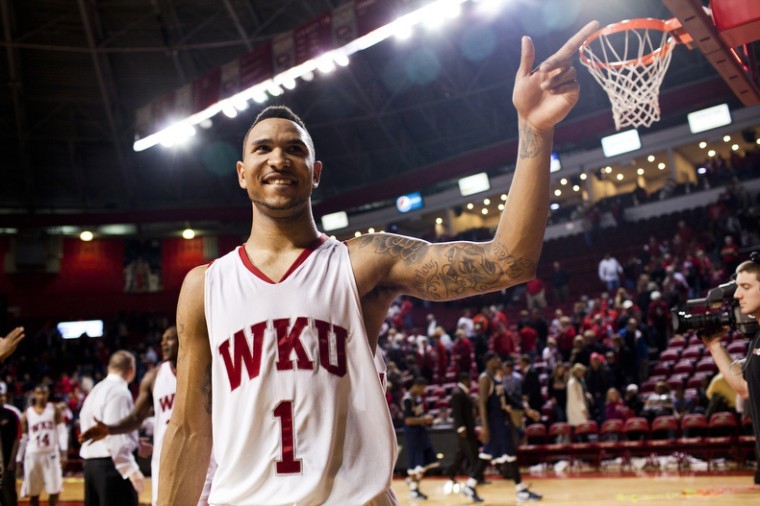 Senior forward Sergio Kerusch smiles to his fans in the student section right after the final buzzer of WKU's Senior Night matchup against Florida International on Thursday night in Diddle Arena. The Toppers won, 80-73.

They weren’t able to breath a sigh of relief until the game was nearly over, but WKU’s seniors managed to say goodbye to Diddle Arena with a win Thursday night.

WKU (14-14, 8-7 Sun Belt Conference) got a fight from visiting Florida International for much of the game, but the Toppers rode standout performances from senior forwards Sergio Kerusch and Steffphon Pettigrew to an 80-73 win on Senior Night.

The win keeps WKU’s hopes for a No. 2 seed in the Sun Belt East division alive, as a win at Middle Tennessee Saturday will earn the Toppers a first-round bye in the Sun Belt tournament.

“It was great to see the seniors out there for the last time, going out on the right note with a win,” Head Coach Ken McDonald said. “Our fan base was incredible, they were loud, and they were into it.”

Kerusch and Pettigrew each recorded double-doubles Thursday, combining for 46 points and 21 rebounds. The game was just the second time in the duo’s careers that they’ve both scored 20 points in a game.

After the game, Pettigrew said it still hadn’t registered with him that he had played his last home contest.

“It still hasn’t hit me yet,” Pettigrew said. “It just felt like a regular game to me, but it’ll probably hit me later in the week.”

The game got heated right out of the gate, as both teams were assessed a combined four technicals in the first six minutes.

WKU senior forward Juan Pattillo received the first for a verbal altercation with FIU’s Phil Gary, then Pettigrew and FIU’s Jeremy Allen were issued double technicals after shoving each other.

FIU forward Dominique Ferguson got the final technical for staring down Topper guard Kahlil McDonald after blocking his shot.

“It was a physical basketball game,” Ken McDonald said. “To be honest, it started physical. Some of our guys tried to set a tone, and it got a little too physical at times — little too much jawing. But it actually kind of woke us up a little bit and got us going.”

FIU held a three-point lead after the last technical, and the Golden Panthers took a 22-20 lead with 7:43 left in the first half on a 3-pointer by Phil Taylor.

But WKU responded with a 19-5 run over the next seven minutes, jumping out to a 39-27 advantage with 37 seconds left in the half.

Pettigrew buried a 3-pointer at the buzzer to give the Toppers a 42-29 halftime lead.

“The game kind of got away from us,” FIU coach Isiah Thomas said. “We battled and got back in it, but our team is still learning that every single play is a big play.”

WKU’s largest lead of the night was 15, which it claimed within the first minute of the second half, but FIU began its comeback with an 8-0 run.

The Golden Panthers slowly chipped away at their deficit, taking advantage of WKU’s 39.1-percent shooting percentage in the second half. The Toppers shot 51.1 percent before the break.

FIU clawed back all the way to within two at 51-49, but the Toppers kept it at bay with a flurry of free throws down the stretch.

They made 8-of-10 free throws in the final 51 seconds of the game after the Golden Panthers pulled within four.

“Coach wanted us to keep building and building and show that we could get another run,” Pettigrew said. “Luckily we finished it out and hit some key free throws there at the end.”

Kerusch led both teams with 26 points and 11 rebounds. He said after the game that his final send-off was an emotional one.

“I don’t want to talk about it,” he said. “I mean, shoot. It’s a hard thing to think about. You’re playing for two reasons. There’s the seniors, who want to go out with a win and want to have a good Senior Night, and then you’ve got a chance at a No. 2 seed a bye in the tournament.

“All of that was in the back of our minds.”

Pattillo notched seven points and seven rebounds in his last game in Diddle.

The Toppers benefited from the return of freshman walk-on point guard Mike Gabbard, who had two points and two assists in 10 minutes, but they may have suffered an even bigger loss.

Sophomore guard Caden Dickerson left the game in the first half with what Ken McDonald said was a separated non-shooting shoulder. McDonald said the shoulder was easily popped back into place during the game, but that Dickerson will be day-to-day.

Although he said Dickerson’s injury “jarred him pretty good,” McDonald said he wasn’t ready to rule out the guard for Saturday’s game against Middle Tennessee.

If the Toppers can beat MTSU on Saturday, they’ll earn the East division’s No. 2 seed by way of a tiebreaker.

A win in Murfreesboro, Tenn., won’t come easy, however. The Blue Raiders have won three straight games against WKU, and McDonald said it’ll be important to stress just how difficult a game it’ll be.

“I expect this team to go out and battle Saturday and try to play better than we did the first time against Middle,” he said. “We have to understand what’s at stake, and I know our guys do.”

Tip-off is scheduled for 7 p.m. Saturday.