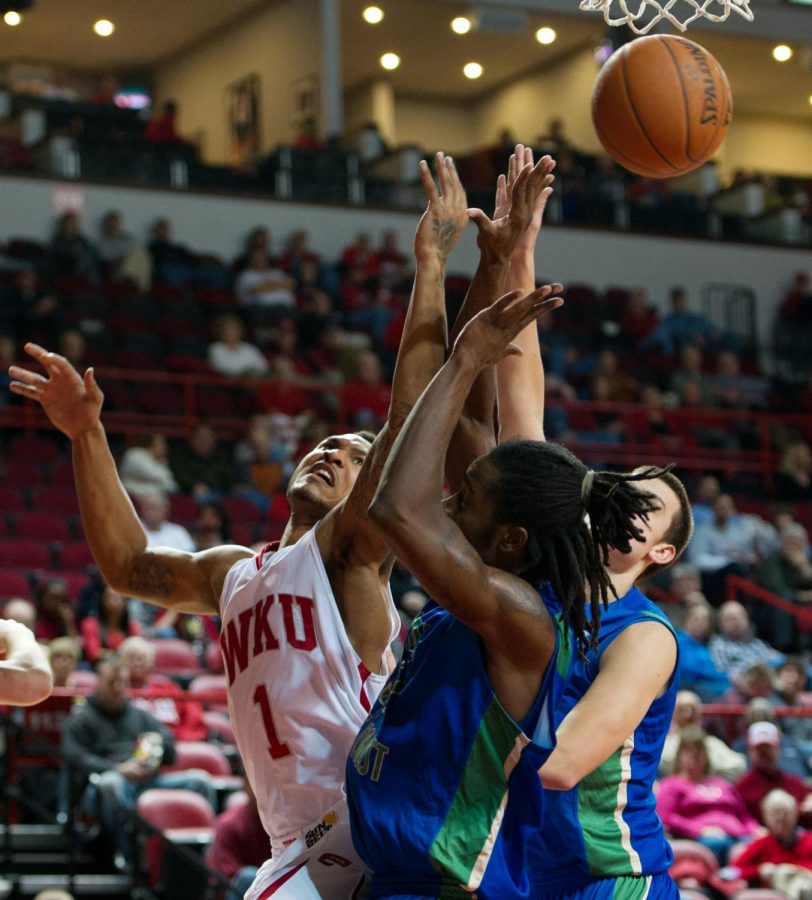 Senior forward Sergio Kerusch fights for a loose ball under the basket in the second half of Monday's game against Florida Gulf Coast. Kerusch led the Toppers with 20 points, and WKU won the game, 80-70.

The Toppers said Monday’s non-conference game against Florida Gulf Coast — their third game in five days — was just about surviving.

And that’s just what WKU did.

The Toppers (12-13) saw their lead shrink to three with four minutes left against FGSU, but a final 9-2 run helped them escape Diddle Arena with an 80-70 win.

“It’s a win,” Head Coach Ken McDonald said. “I think we were saying the right things in the huddles in terms of the players, and it’s actually just a great learning lesson. We were a couple plays from being in a really tough spot.”

McDonald said the 41 combined fouls called in the game made it hard to find a groove, but that the Toppers just didn’t bring it at times.

“It was a little bit hard to get into the rhythm of the game … but we weren’t very physical,” he said. “I don’t know if complacency is the word, but we stopped being physical.”

Some hot shooting helped the Toppers overcome its troubles on the glass, as WKU made 10-of-18 shots from 3-point range.

They were led by senior forward Sergio Kerusch’s 20 points.

“I’m confident,” Dickerson said. “I’ve just been getting shots up lately because there was a stretch there where I couldn’t really hit a thing. These guys are drawing a lot of attention, getting in the lane and hitting me when I’m open, so I’m trying to knock it down when they get me open.”

A 3-pointer by Christophe Varidel cut WKU’s lead to 37-33 with less than a minute left before the break, but junior guard Kahlil McDonald made a 3-pointer at the buzzer to put the Toppers up seven.

FGCU’s Anthony Banks scored 16 points in the first half and led all scorers in the game with 25.

“I think we let down our guard a little bit,” Dickerson said. “We played down to their level, and we kind of lost our intensity there for a while.”

WKU failed to pull away in the second half, but a 3-pointer by Kerusch swelled the lead to 70-56 with 7:33 remaining.

FGCU then rattled off a 12-1 run, which Varidel capped with a layup that made it 71-68. But the Eagles scored just one more basket the rest of the way, allowing WKU to escape and learn a lesson in the process.

“Just don’t take things for granted,” sophomore guard Jamal Crook. “Every opponent that we play is always going to be bring it, so just can’t take teams for granted. We have to play with high energy and give it our all.”

WKU shot 45.5 percent from the field and totaled 15 assists.

Crook tied his career high for assists for the second straight game, recording nine of them with eight points. That makes 18 assists for him in the past two games with just one turnover.

“He’s one of the biggest reasons why seven of nine are in the win column.”

It’s back to Sun Belt play for WKU now, as the Toppers travel to Arkansas-Little Rock at 7 p.m. Thursday.

They’ll have the chance to bring their record to .500 for the first time since Dec. 11, but McDonald said the last four games of the regular season need to be about improvement more than anything.

“We want to build momentum, continue to play well and put games in the win column,” he said. “I think that’s going to help confidence coming down the stretch, and we all know what we’re playing for.”