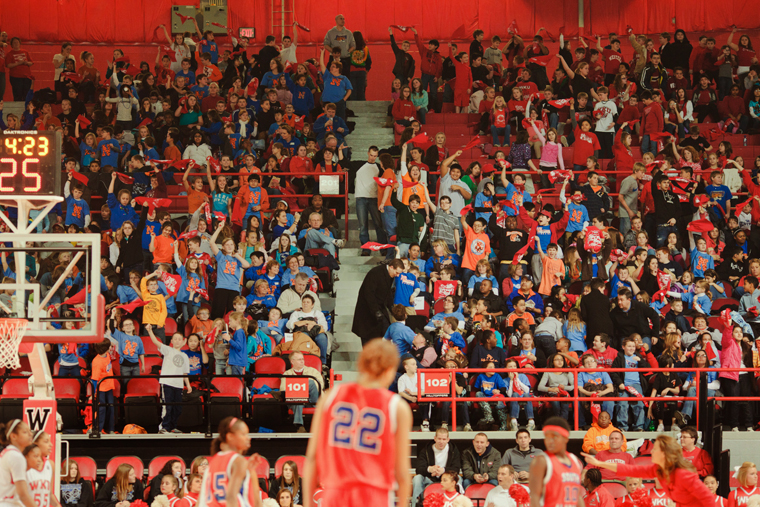 Diddle Arena was filled with students from Warren County and Bowling Green Independent schools for the Lady Toppers’ game against South Alabama on Feb. 2. WKU won 56-41 in front of an announced crowd of 7,094.

Wednesday’s game between the Lady Toppers and South Alabama was anything but ordinary.

With more than 6,000 elementary students from Warren County invited to the game as part of “Spread the Red Education Day,” the game itself took a backseat.

And even though the students weren’t in a classroom, Athletics Director Ross Bjork said there was plenty for the students to learn about.

“A lot of these kids — even though they grow up in our community — have never been to our campus, let alone a basketball game,” he said. “So for their first time to come to the campus, and then a basketball game on top of it, to me that really puts the icing on the cake for this day.”

The game itself was the final touch on what Bjork said was a month-long relationship between the women’s basketball program and Warren County schools.

During the time leading up to the game, statistics and other information about the Lady Toppers and South Alabama were incorporated into each school’s curriculum so the students could learn while also being exposed to athletics.

It was the first time such an event took place at WKU, and it ended up setting attendance records in the process.

Senior forward Arnika Brown said she had never played in front of a crowd that big until Wednesday, adding that it was a good way to introduce kids to basketball.

“I think the university should do it again and just let it carry over throughout the years,” she said. “I enjoyed it, especially being a senior and this being my last go-around at it.”

Senior guard Amy McNear said she also liked the idea and the opportunity to be a part of a record-setting crowd, even if it meant getting a headache in the process.

“I might need to take a couple Advils tonight. It was very loud,” she said. “But it’s always fun playing in front of a lot of people, especially for the kids. We like giving back to the community. “Just to see a bunch of kids happy, screaming, and having fun and being excited at the game was a big energy-booster for us.”

But there was still a game to be played — and an important one at that.

After a sluggish first half where the Lady Toppers scored just 19 points, they shot 54 percent from the field to win 56-41. The win snapped a two-game losing streak and separated WKU from South Alabama for second in the Sun Belt’s East Division.

It also kept the Lady Toppers’ hopes for a first-round bye in the Sun Belt Tournament alive.

Head Coach Mary Taylor Cowles said she couldn’t have envisioned the day being any better.

“Everyone got here, and they got here safely,” she said. “Plus we won, so what more could you ask for?”