Q is for Quilter: Student appreciates traditions of quilting 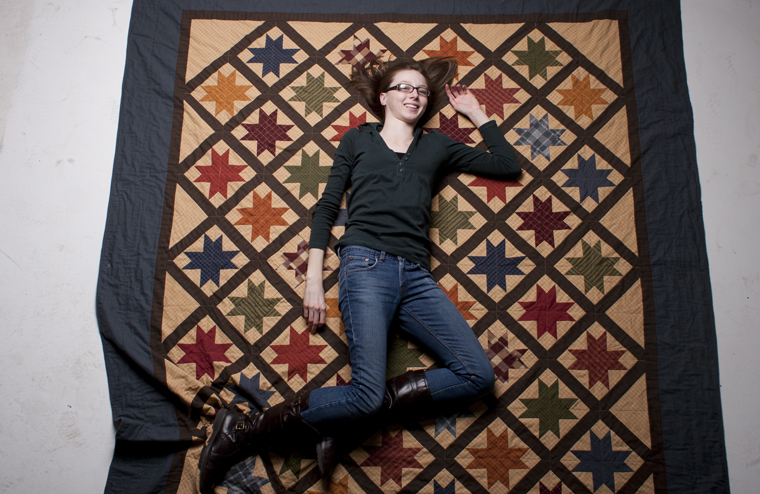 Jordan Olberding, a sophomore from Oceanside, Calif., is an avid quilter. Olberding started quilting at 16 and has completed over six full-size quilts since. She recently brought her quilting supplies back to school with her and works on quilts in her spare time.

Most of the people Jordan Olberding sees doing one of her favorite hobbies are 40 or older. But the 19-year-old sophomore from Oceanside, Calif., started quilting when she was 16 and has made six full-size quilts since.

She became interested in quilting when her mom bought a quilt shop where Olberding worked and took quilting lessons.

“Being around quilters and all the fabrics, you just naturally get into it,” she said.

If she works on a quilt for a few hours each day, she’ll have it finished in about a month, Olberding said. Because she stays busy with schoolwork, Olberding said she mostly quilts while on vacations or when she is home.

When she does have the time to quilt, though, Olberding said she likes using patterns with a lot of triangles and fabrics that were popular during the Civil War, such as small floral prints.

Her favorite part is laying out the different patterns of the whole quilt and seeing what it will look like.

But having the space to lay it out can be an issue, which she learned when she sewed a quilt for her boyfriend in her dorm room.

“It was insane because the quilt was so huge,” she said. “I even had to move my furniture.”

Olberding said she now has a sewing machine in her room, so she has done some quilting there despite the lack of space.

Her boyfriend, Louisville sophomore Aaron Daley, said he thinks her hobby is interesting.

“The quilt she gave me is very special because of its originality,” he said. “No gift of mine has ever displayed so much time and effort from the giver.”

Olberding said most of the quilts she makes are gifts. It’s hard to make money off them, because no one wants to pay that much money for them anymore.

The cost of materials for an average-size quilt can range anywhere from $60 to $150, depending on the pattern and the store, Olberding said.

She also likes to make baby blankets, purses and clothing as gifts.

Louisville sophomore Elizabeth Hisle said she also likes to sew clothing and has worked with Olberding on a quilt.

“A quilt is something you will keep for

ever, and everyone can connect with them,” she said.

Hisle said she has learned that people have some misconceptions about quilters.

“A lot of people misconstrue it because they think it’s a hobby for old people,” she said. “But in reality, it’s fun for everyone.”

Olberding agreed that most young people think quilting is not very cool, but she doesn’t see the art dying out anytime soon.

“Quilting is a good pastime and anyone can do it,” Olberding said. “It gives you a great sense of accomplishment to be able to say, ‘I made that.'”