WKU gets blowout win to clinch sweep in opening series 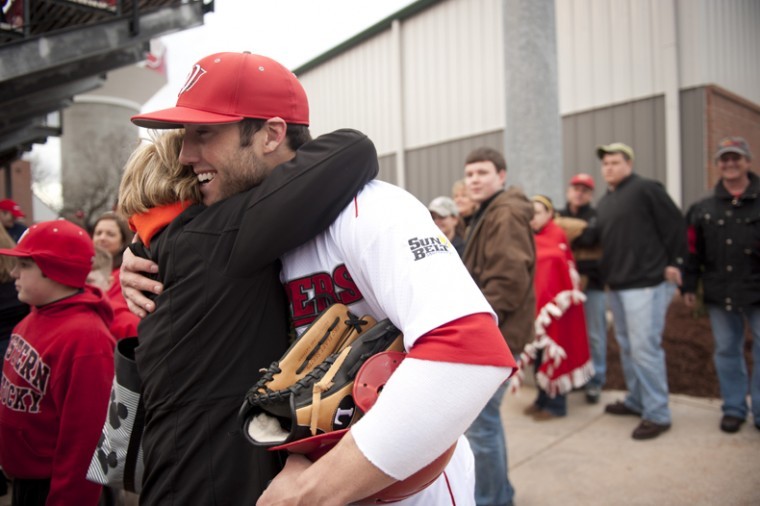 Junior outfielder Kes Carter embraces a fan after the Toppers' win over Bowling Green State on Saturday at Denes Field. Carter went 3-for-5 with an RBI and three runs scored in Sunday's 12-3 win, helping WKU finish a three-game sweep of BGSU.

With a chance for a sweep on the line Sunday, WKU’s hitters went right to work from the beginning.

The Toppers (3-0) used a four-run first inning and a three-run second inning to jump out early on Bowling Green State en route to a 12-3 victory at Denes Field.

WKU scored at least one run in each of the first six innings.

The Toppers were led offensively by junior center fielder Kes Carter, who went 3-for-5 with an RBI and three runs scored.

Carter had just one hit in the first two games of the season.

“It was particularly pleasing to see Kes have a good day,” Head Coach Chris Finwood said. “He struggled his first two games, but he was out here with me at nine this morning getting some extra hitting in, and he took it into the game.”

Carter said he was happy to start the season with a weekend sweep and an undefeated record.

“It’s definitely a confidence-builder to come out on Sunday and grind one out,” Carter said. “After winning the series on Friday and Saturday, it was great to come out today and finish the sweep.”

The sophomore went 4-for-4 with an RBI and two runs scored out of the ninth spot in the batting order in his first start of the year.

“Borgy’s a great kid who’s been working awful hard, and we wanted to get him in the lineup today,” Finwood said. “Anytime your nine-hole guy goes 4-for-4 that flips the lineup a bunch and gives you chances to score a lot of runs.”

While the offense stole the spotlight Sunday, freshman pitcher Justin Hageman was solid in his college debut.

Hageman gave up three runs in the first two innings, but then bounced back with three shutout innings.

“The first two innings I was hitting my spots really well,” Hageman said. “Then the umpire finally loosed up and started giving me the corners the next few innings.”

A Hopkinsville native, Hageman was a 32nd round draft pick of the Kansas City Royals in the 2010 MLB Draft who turned down pro ball to play for WKU.

He said his debut, which lasted five innings, was “everything I could dream about.”

“I was a little jittery because it was my first start in college,” Hageman said. “But it was great though. I had a lot of fun.”

The Toppers will now take their momentum on the road with a 3 p.m. game Wednesday at Lipscomb.

Finwood said that senior Brian Edelen, who pitched three scoreless innings out of the bullpen Sunday, will get the start for WKU.

“I thought (Edelen) threw the ball great today,” Finwood said. “It was good to get him some confidence going into that Wednesday start.”