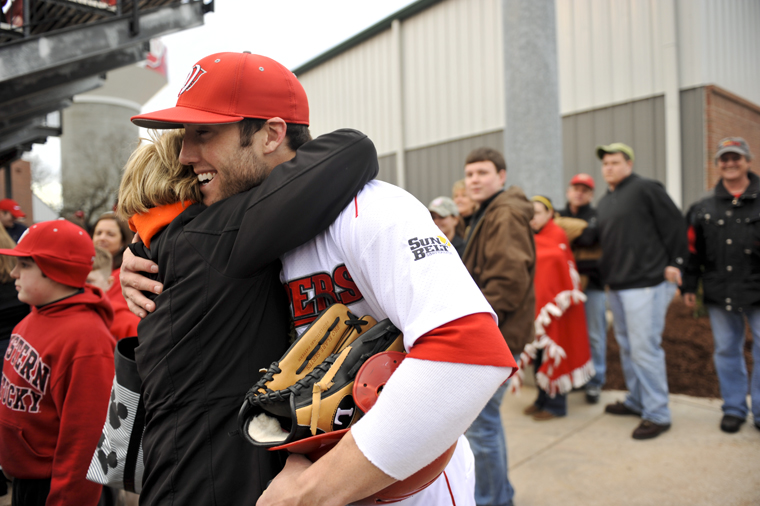 Junior Will Higdon leaned against the wood railing at Nick Denes Field on Friday, watching the Toppers play on Opening Day.

Overcast skies and scattered showers delayed the first pitch of the 2011 season by 32 minutes, but that didn’t keep Higdon and nearly 700 other fans from seeing the action.

The Owensboro native said having baseball season back is “a breath of fresh air” for the athletics programs here at WKU.

That thought seemed to be echoed by the combined 2,123 fans that ventured out to the ballpark this weekend for the Toppers’ three-game sweep of Bowling Green State, including Owensboro junior Skyler Shown.

“I think the atmosphere here is getting better and better, especially now that they get to play at the Hot Rods stadium,” Shown said. “I think last year a lot of people who hadn’t seen them play got to see them play. There is a new hype surrounding the program now.”

The continued partnership between WKU and the Bowling Green Hot Rods has also led to an increased excitement for the season.

WKU will play at Bowling Green Ballpark on April 5 against Louisville and again on April 19 against Kentucky.

Athletics Director Ross Bjork said with a winter season that didn’t bring much success, baseball comes at a great time.

“Football, we are on the right track,” Bjork said at Sunday’s game. “Yeah, we struggled in basketball, but we’ll get it going. History speaks for itself there. We’ll be fine, but yes, welcome baseball.

“I think people always look forward to baseball, because one, it’s outside, and two, our program is really evolving, growing and flourishing under Coach (Chris) Finwood. Winning does help a lot of things.”

The Toppers saw national success last season, reaching as high as No. 18 in the country with wins over Tennessee, Vanderbilt and Texas A&M.

Bjork said the Toppers’ success last year is what is bringing more fans out early, because they hope to see it again.

“Based on what people have told me was happening seven to eight to 10 years ago, this place was empty,” Bjork said. “Last year, we averaged just under a thousand for each game, and then at the Hot Rods, we saw 6,100 at that game. To me, there’s no question that fans are excited, and you see it on a day like today.”

But to Kim Dykes, mother of junior third baseman Casey Dykes, fans are putting their last hopes for this athletics season on the baseball team.

“We feel the pressure that the attention is on this sport now,” Dykes said. “Our sons are feeling it too, but I think they internalize it more than we do as parents.”

Dykes said the position the baseball team is in now is not a bad thing, but a chance to make the program grow even more.

“They are working to make the program grow and improve,” Dykes said. “Having our sons being freshmen, sophomores and now juniors during this time is great. But it was the ones before them that helped set this program up where it’s at now. The boys are happy and excited, and so are the parents.”