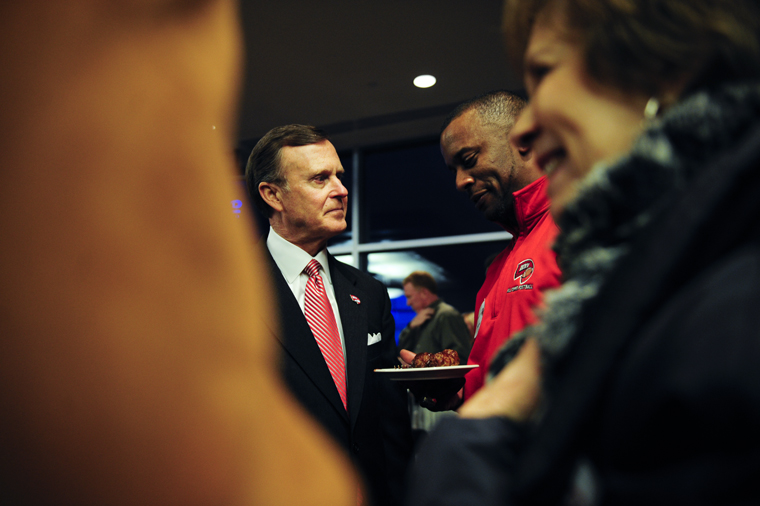 And for Taggart, it all starts with the 2011 signing class that was rated No. 1 in the Sun Belt Conference by Rivals.com for the second consecutive year, including 11 players that were rated three-star prospects.

The signing class also earned a No. 1 rating from Scout.com.

Allen Trieu, Midwest recruiting manager for Scout.com, said the class is not only impressive in the Sun Belt Conference, but in the national scope as well.

“It’s great for them, having only been in Division I for a few years, to be able to sign a class like that,” Trieu said. “They’re the top class in the Sun Belt, but they’re ahead of a few schools in the MAC and the Mountain West, so I think for them to finish where they are nationally is a victory.”

Assistant Coach Eric Mathies, who is also WKU’s recruiting coordinator, said there were a lot of needs that the Toppers had to address when pursuing recruits.

With that came finding those who were versatile enough to meet those needs.

“When you start to break down the class, there is a lot of versatility,” Mathies said. “We’ve got some guys that can do different things as they start to mature and as they start to get better as football players and understanding the system and techniques.”

With such a large recruiting class, Taggart said incorporating new faces into the roster should further change the losing mindset that has haunted WKU the past few seasons.

That mindset developed from a 4-32 record over the last three years, but Taggart said the newest recruits are starting with a clean slate.

“They don’t know anything about all that negative stuff,” Taggart said. “All they know is playing and having fun and winning ball games. I think it’s good to get fresh blood in there. I think our current guys who are here are starting to realize they are pretty good too.”

To achieve the “big-time” status Taggart wishes for the Toppers, he said fans will notice some changes.

The WKU football team unveiled the design for its new helmets on Wednesday and will later reveal an entirely revamped jersey.

With 25 scholarships to give and 26 recruits signing, Taggart said he and his staff have “plans” to accommodate the eligibility issues that come with having an extra player.

But even facing that dilemma, he said nothing was going to get him down after signing what he called one of WKU’s best recruiting classes ever.

“The most important thing is we got Division I football players that wanted to be here. That’s what means a lot to me,” Taggart said. “I know we are going to get their all out of them when they get here. They wanted to be here, and they had pretty good options to go other places, but they decided to come here.”