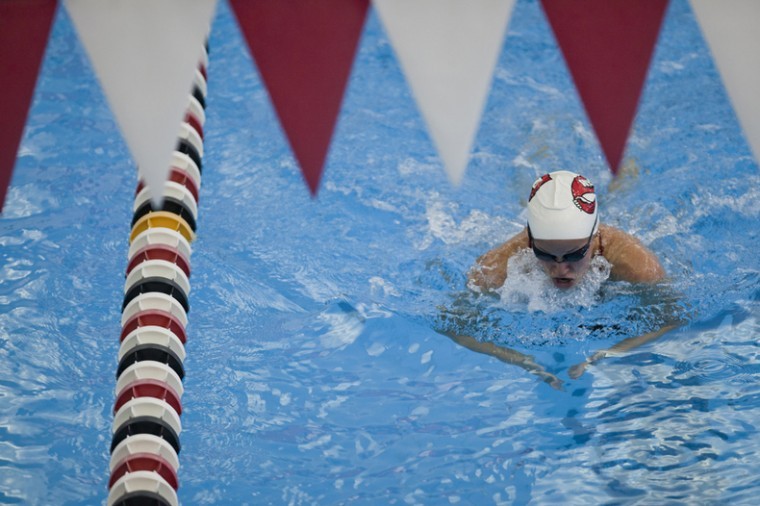 Senior Brittany Doss gasps for air as she swims the 100-yard breaststroke, the ninth of 32 swimming events at the meet against SIU in the Bill Powell Natatorium on Saturday. Doss came in first in the event with a time of 1.05.24.

The swimming and diving teams at WKU finally have a chance to rest after their home victories over Southern Illinois this weekend.

Head Coach Bruce Marchionda said the teams have been in their most intense training period of the year over the past several weeks.

And with Saturday’s meet behind them, focus can now be placed on the upcoming Sun Belt Conference Championships.

“I’m extremely pleased with probably about 90 percent of the races,” Marchionda said after the meet.

The teams were also dealing with the added pressure of performing on Senior Day. The bleachers at the Powell Natatorium were filled on Saturday for several swimmers’ final home performance.

“This has been such a great class for the past four years,” Marchionda said. “To see them go out with two wins means a lot to them, and it means a lot to us.”

Marchionda cited WKU’s performance in the men’s 200-yard medley relay as a big part of the win. The men took first, second and third place in the early event, giving the team momentum that Marchionda said they rode for the rest of the day.

Senior David Menchinger agreed that winning the relay was an important achievement.

“We were one, two and three at the relay, and we kind of snowballed from there,” he said.

Assistant Coach Brian Thomas said he was pleased with the aggression of both teams.

“This was really a solid meet on both sides — men and women,” he said.

Marchionda said that his next challenge will be setting the lineup for the conference championships, calling it “the worst thing I have to do all year.”

The Sun Belt titles will be decided from Feb. 23-26 in Dallas.

Menchinger said he plans to continue to train hard until then.

“At this point in the year, we can’t afford to drop our endurance,” he said.

Menchinger said he was happy with the efforts and turnout on Senior Day, though his parents weren’t able to be there.

“Ms. (Julie) Ransdell got to be my mom for the day since my parents couldn’t make it,” he said, laughing.

Sophomore Alex Van Oost said she had become close with many of the senior swimmers and is glad they were able to end their final home meet on a high note.

“It was definitely nice having one more meet with them,” she said.  “They all swam well and had a great meet.”

Menchinger said that while the most intense training is over, the teams need to continue to work hard.

“Like every other program, our turns and starts could use the most work,” he said.  “It’s crucial to perfect those.”

Marchionda agreed that work still needs to be done, saying the teams will continue to train as the conference championships loom.

“We’ve got our work cut out over the next three and a half weeks,” he said.