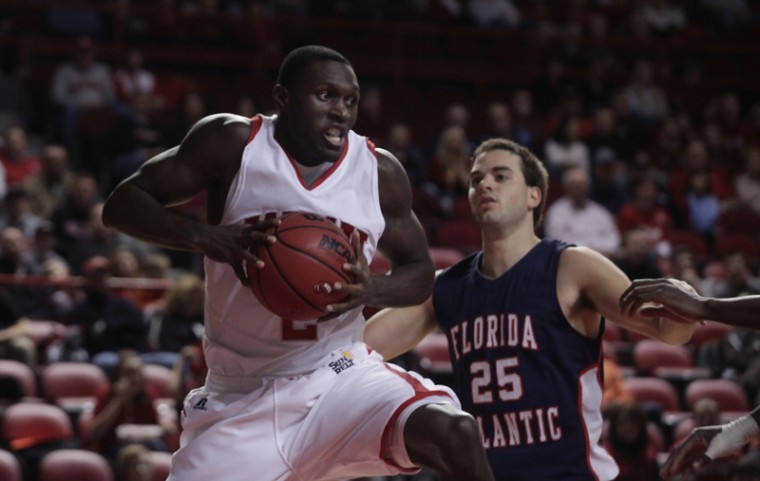 Senior forward Juan Pattillo and WKU visit South Alabama at 7 p.m. Thursday. Follow along as the Toppers search for their first victory in more than five weeks.

The Toppers have reached a pivotal point in their season, standing at 5-11 overall and 0-4 in the Sun Belt for the first time ever. WKU travels to South Alabama at 7 p.m. Thursday. The Herald can’t be in Mobile, Ala., but follow along for periodical updates from the game.

It didn’t end up being pretty or dominant, but WKU finally got the job done for the first time in 40 days.

The Toppers pick up their first Sun Belt win of the season and move to 6-11 overall.

Pettigrew led WKU with 19 points. Kerusch had 17 points, and Kahlil McDonald had 15. Pattillo finished with 10 points and 10 rebounds.

WKU turned the ball over 21 times but shot 56 percent from the field. Look for more on the win later at wkuherald.com.

The Jaguars have had another quick run — this one a 10-2 burst — to climb all the way back within five points.

WKU has turned the ball over 20 times and has surrendered eight 3-pointers. The Toppers have lost every game this season in which they’ve given up that many shots from behind the arc.

The Toppers are getting South Alabama’s best comeback effort, as a 16-5 run by the Jaguars has cut WKU’s lead to 11.

On a bright note for WKU, Kahlil McDonald has hit four 3-pointers and has a career-high 15 points.

WKU has managed to maintain its lead and could be on the verge of outscoring its opponent in both halves for the first time since the second game of the season against Alabama A&M.

The Toppers are still shooting 60 percent from the field and are destroying the rebounding battle, 30-14.

The Toppers have pushed their lead to 22, led by Kerusch’s seven second-half points.

WKU has three players in double figures scoring — led by Pettigrew’s 19 — and the combination of Kahlil McDonald and Jamal Crook has produced nine assists and four turnovers at point guard.

WKU finishes the first half on a 20-4 run over the final eight minutes, taking a commanding lead into the locker room.

The Toppers turned the ball over 11 times, but they shot 64 percent and had 10 assists. South Alabama shot just 26 percent from the floor.

Pettigrew and Kahlil McDonald each have 12 points, and Kerusch and Pattillo have six apiece.

WKU rattles off a 15-4 run over the last five minutes, stretching its lead to 14 points. The Toppers seem to be as close to in a groove as they’ve been in a long time.

The Toppers are 10-of-15 from the field, and South Alabama has shot 25 percent so far, but WKU hasn’t been able to pull away because of costly turnovers.

Pettigrew leads all scorers with 10 points.

The Tops used a 10-2 run to take a lead at the under-12 timeout, with Steffphon Pettigrew and Cliff Dixon scoring all of the points during the spurt.

WKU is shooting 55 percent and out-rebounding USA by seven, but the Toppers have been hampered by seven early turnovers.

The Tops have gotten off to a sluggish start on offense, turning the ball over six times in the early going. A 3-pointer by Kahlil McDonald has been WKU’s only points so far.