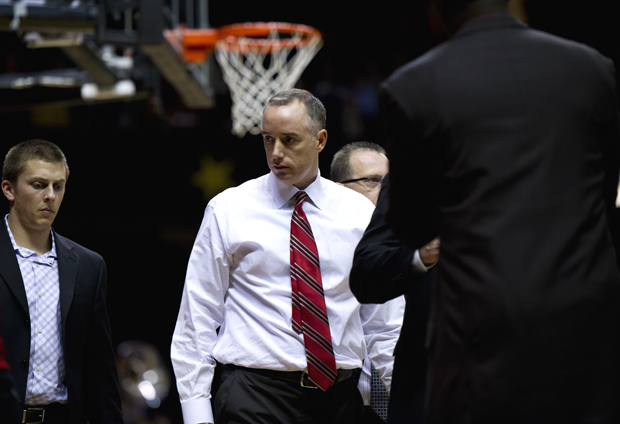 WKU head coach Ken McDonald prepares to speak to his team during a timeout at Vanderbilt earlier this season. McDonald is under pressure from fans as the Toppers sit at 5-8.

Ken McDonald is an extremely well-spoken coach. He understands fan expectations, program prestige and what needs to happen for WKU’s current downward spiral to come to an end.

But growing sentiment against McDonald revolves around the notion that while the coach talks the talk, his players haven’t walked the walk since McDonald’s first season at WKU. And even then, many will say McDonald and the Toppers knocked off Illinois in the first round of the NCAA tournament with Darrin Horn’s leftovers.

It’s easy to draw parallels between McDonald and former WKU coaches Murray Arnold and Matt Kilcullen. Both inherited teams coming off NCAA tournament appearances, both returned to the tournament in their first season, and both never made it back again.

But McDonald deserves more time, and here’s why:

Arnold and Kilcullen were succeeded after four seasons at WKU, with at least two of those losing seasons. McDonald, currently in his third season, has yet to finish with a losing record, though WKU is 5-8 after a Sun Belt Conference-opening loss to Arkansas State on Saturday.

If even Arnold and Kilcullen were given a fourth season, McDonald should get one too.

Yes, WKU fans are hungry right now. They’re headhunting. Someone has to be the scapegoat for general athletics mediocrity that’s saw the wheels fall off a promising baseball season last spring, a 2-10 football season and one of the worst starts in program history for the women’s basketball team.

It seems as WKU’s men’s basketball program goes, so does the athletic program’s claims to success or a lackthereof.

McDonald, though, isn’t to blame for everything.

He can’t help if Kahlil McDonald and Juan Patillo have had personal problems this season that have limited their minutes at times. If Ken Brown committed a “violation of academic team policy” that led to Brown’s dismissal. If Brandon Peters is academically ineligible for the rest of the season after grades from the fall semester were registered.

Yes, McDonald and his assistants recruited all those players. Maybe they’re at fault for jumping at the best talent rather than the best fit for a program, as evidenced too by would-be players Terrence Boyd and David Laury. Both were released from the team before the 2009-2010 season.

But recruiting for a good fit is a learning process. Next season McDonald is set to bring in five true freshmen. Five program players who all have the potential to be the next Steffphon Pettigrew, Jeremy Evans, Orlando Mendez-Valdez or A.J. Slaughter-type player.

And if I remember correctly, nobody complained when McDonald landed Peters out of Houston Yates High School and Pattillo, an Oklahoma transfer who despite some past troubles possesses tons of talent.

Should WKU’s administration follow through with what many fans are hoping for — that McDonald is let go after this season or even as soon as possible during it — the 2011 recruiting class dissolves and sets the program back even further than it is now.

Besides, what did WKU fans expect at this point in this season? For a mid-major program — let’s not kid ourselves, that’s just what WKU is — the non-conference schedule McDonald pieced together was brutal. Absolutely brutal looking before the season, and it turns out the slate had teeth when the season actually began.

What that schedule has done is expose a lot of problems that WKU might not have otherwise seen until it was too late.

The Toppers cruised through a pair of exhibitions before manhandling St. Joseph’s and Alabama A&M. Then the season really started with losses to Minnesota, Davidson, South Carolina, Vanderbilt and Memphis.

The story of those games was the turnover bug, and though the Toppers have lost three straight, they’ve averaged just under 15 turnovers a game. There was a point this season where 15 turnovers in a half would have been improvement.

In the midst of that were also chemistry problems. Pattillo and Kahlil McDonald both lost playing time, and Sergio Kerusch and Cliff Dixon feuded on Twitter after a road win — yes, a win — over Bowling Green State. The Toppers also lost Brown for the season, yet still rallied to beat Southern Illinois, then fell to Arkansas State after losing another point guard in Peters.

Maybe things aren’t as bad as they look right now because of a tough schedule. Maybe it’s a growing period such as what WKU has already experienced that will pay dividends when the Sun Belt tournament rolls around. After all, it’s winning those three or four games in a row that will make or break the entire perception of this season.

Make the NCAA tournament, and McDonald is a hero. Miss it, and he’s the next Arnold or Kilcullen.

That hero status would only last until someone decides McDonald’s personal life gets in the way of basketball — as if they could be the judge of that. Or until next season’s rigorous non-conference schedule begins breaking down the Toppers again.

This is all still a learning experience for a third-year head coach who has never claimed to be perfect, but instead speaks his mind and sounds good while doing so.

As McDonald proved in his first season, he can be successful with the right players. And as McDonald is showing now, there’s a potential for things to get better in WKU land.

McDonald had the right idea with his scheduling. His recruiting is much improved. And WKU twice set a precedent that a coach deserves four seasons to make his mark on the program.

Now we’ll see if McDonald gets that time.