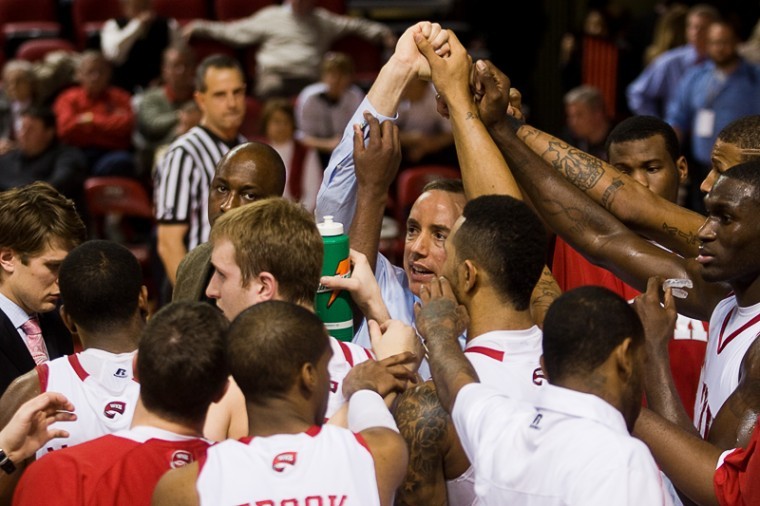 The Hilltoppers rally around Head Coach Ken McDonald during a timeout Thursday. WKU lost to Denver, 62-59, dropping its record to 5-9 and fueling further criticism of McDonald and WKU.

Fan satisfaction for WKU basketball is at a season low after the Toppers’ 62-59 loss to Denver on Thursday, coming in under the category “very unhappy” on the number-driven website statsheet.com.

That’s not to say anyone needs a flashy graph that highlights downward trends with dark, negative red to gauge how the WKU fanbase is feeling these days.

Head Coach Ken McDonald can instead put it into words.

The Toppers are an inexplicable 5-9 on the season and 0-2 in the Sun Belt Conference. They’ve dropped every opportunity to prove themselves against ranked teams, and they’ve squandered most attempts to save face against unranked foes.

People are starting to notice that things might not turn around under McDonald’s leadership now more than ever. That might be evidenced best by the number of conversations President Gary Ransdell and Athletics Director Ross Bjork had with those dressed far better than most and with undoubtedly deeper pockets than most at Thursday’s game.

If Ransdell and Bjork are leaning toward a change at this point, they’re hardly alone. An anonymous user started a website following Thursday’s game urging WKU officials to fire McDonald, saying “The time is now” as opposed to the end of the season, when the WKU administration typically evaluates its coaches. Talk on message boards and social media echoes more of the same.

You can’t blame the fans for applying some pressure. WKU has one of the best traditions in college basketball, and starting 0-2 in a weak league flat-out isn’t acceptable. McDonald said as much after the Denver loss.

“There’s always pressure. That’s my job,” he said. “That’s why there aren’t many division I coaching jobs, and there certainly aren’t many jobs as good as this one.”

It’s lucky for McDonald that pressure has seemingly motivated WKU many times this season.

Players couldn’t speak for themselves on Thursday, because for the first time this season, they weren’t made available to the media. But trailing to Denver by 18 points at home is pressure, and the Toppers cut that deficit to as few as two points and managed to give themselves a chance inside of a minute to play.

Creating an early hole has been a season-long trend for WKU, dating back to a 13-point deficit to Hofstra that it overcame. The Toppers also put themselves down early in losses to Davidson, Vanderbilt and Memphis, among others.

In each of those games, WKU showed flashes of what many thought this team could be. Under pressure to come back from large deficits, the Toppers played better.

Now WKU faces its largest deficit of the season: a 5-9 record. This truly is rock bottom for a program that hasn’t seen worse days in a decade.

McDonald said some of the outside pressure to turn this season around can be used positively, because to block all of it out in a small town such as Bowling Green is “a little bit tough…obviously with a program that’s used to winning.” So now the coaches can use pressure as a motivator.

“I think the guys have to put their foot down, and I think we all want that,” McDonald said. “I think you saw a team in the second half that kind of put their foot down. Now (it’s) having the toughness to understand that no games are going to be easy games.”

For what it’s worth, on Thursday McDonald didn’t sound like a coach who thought he might soon be fired. He talked at length about how the coaching staff will come back from the Denver loss, taking the next week to prepare for a road game at Troy.

Yes, McDonald’s job status isn’t up to him. But the WKU administration — namely Ransdell and Bjork — also know this season is far from a lost cause.

With life in the Sun Belt, a season never really is over until you’re on the losing end of a conference tournament game.

But for a team to put itself in a must-win situation is just added pressure. By the time the Toppers make it to Hot Springs, Ark., they should be pretty used to it.