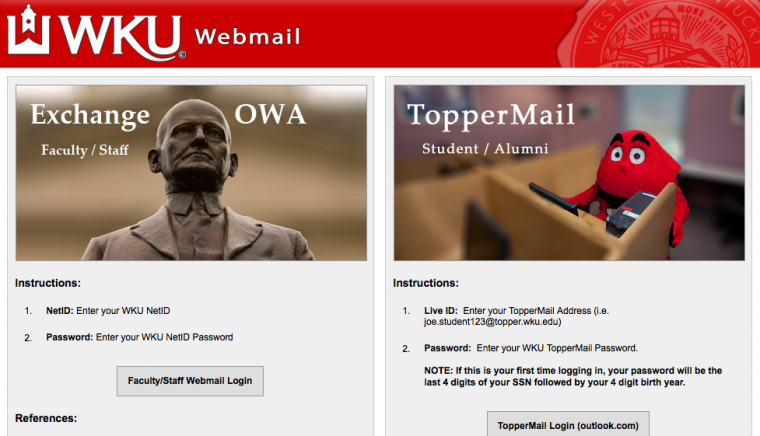 Starting today, all WKU student and alumni e-mail accounts have been converted to the TopperMail account system, which ends in @topper.wku.edu instead of @wku.edu.

All new e-mails received to @wku.edu accounts will be forwarded to TopperMail until March 1, according to an e-mail sent out to students and alumni. Old WKU e-mail accounts will remain available until that date as well.

WKU has tried to speculate what sort of support would be necessary as students and alumni begin to login to their new accounts, said Gordon Johnson, director for Administrative Systems and Applications. He said WKU started the process on the first day of Winter Term with the anticipation that the number of people trying to login will be fewer than in the spring.

“As we get closer to the spring semester, the number of users will ramp up, and we might see more of a support issue,” Johnson said Monday. “But we can tell there are a lot of people who have logged on already, and we haven’t seen a lot of a support issue. Most people seem to figure it out.”

With this change comes a few differences in the e-mail-checking process. Users must go to webmail.wku.edu and look up their new TopperMail e-mail address, according to WKU’s IT website. The password will be the last four digits of the student or alumni’s Social Security Number and the four digits in the year they were born. Once logged in, users will be required to change this password.

Johnson said WKU has been looking for a way to improve e-mail for a number of years, and TopperMail, part of Microsoft’s [email protected] e-mail system, may help that.

“It’s going to save us a lot of money and save a lot of administrative personal resources,” he said. “Plus, it’s going to provide things we can’t provide economically.”

Among these benefits are a larger inbox, with 10 gigabytes of storage space, and a SkyDrive, where users can store personal files, with 25 gigabytes.

Johnson said the gradual switch over the next three months gives users a chance to change their e-mail address on external sites such as Facebook.

If users find any problems with the changes, Johnson said WKU is prepared to help.

“We actually have sort of a SWAT team…a special help desk crew in place if we do see support issues,” he said.