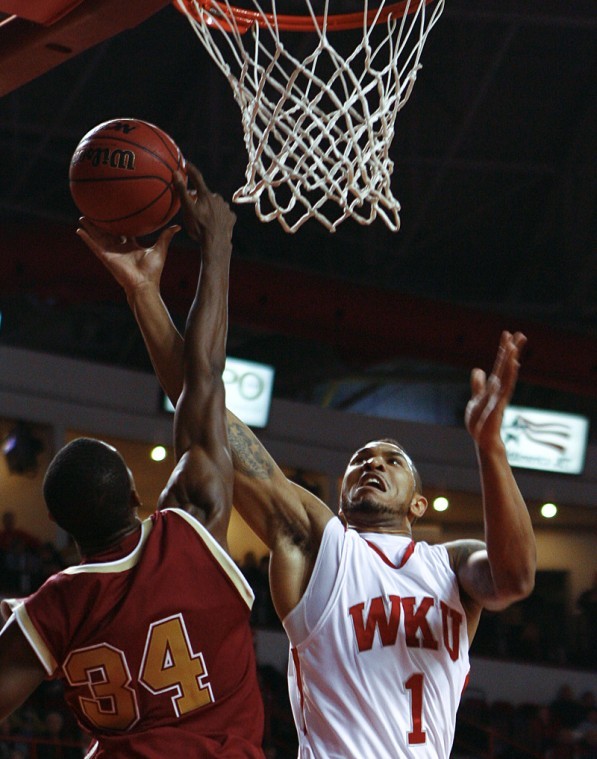 Senior forward Sergio Kerusch is blocked by Denver's Chris Udofia in the first half of Thursday's home game at Diddle Arena. WKU lost 62-59, falling to 0-2 in the Sun Belt Conference.

Head Coach Ken McDonald said WKU is trying to become the hunter instead of the hunted.

But like they have many times already this season, the Toppers fell victim to a sluggish first half Thursday night.

WKU (5-9, 0-2 Sun Belt Conference) allowed Denver to take a 37-22 halftime lead with a flurry of backdoor plays and 3-pointers, and the Pioneers maintained that hot start for a 62-59 win in Diddle Arena.

“Denver’s the kind of team that preparing for them is a lot different than other teams,” McDonald said. “That Princeton style can really mess you up. They did a good job freeing people up, they did a good job with their movement, and ultimately that dug us a hole. Our man-to-man defense wasn’t there tonight.”

The large, early deficit stunned the Toppers and the fans in Diddle, spurring clearly audible boos in the arena for the first time this year.

WKU’s players were not made available to the media after the game — also a first this season — but McDonald said it was obvious that the Toppers’ biggest problem is spotting their opponents a sizeable lead.

“We have to get to the point where you cannot let a team go on a run that gets you down 12, 14, 16 points before you actually react,” he said. “In the second half, we reacted the right way. We’ve got to get to that point earlier in the game, regardless of who we’re playing.”

WKU’s only lead of the night was the first basket of the game, a layup by senior forward Steffphon Pettigrew.

Denver (7-9, 3-0 SBC) followed with a 12-2 run, including eight points from guard Brian Stafford. Senior forward Sergio Kerusch pulled WKU within 22-16 with a putback at the 9:16 mark of the first half, but the Toppers went scoreless for more than the next five minutes.

The Pioneers then scored eight of the last 12 points of the half, taking a 15-point lead into the break.

“I thought we got down on ourselves a little bit when they made a run in the first half,” McDonald said. “I wasn’t happy with how we responded.”

Denver grabbed its largest lead of the game at 44-26 with 18:04 left, but a different WKU squad took the court the rest of the way.

The Toppers outscored Denver 37-25 in the second half, shooting 55.6 percent in the frame.

They still trailed by 10 with 1:58 left, but two baskets by senior forward Juan Pattillo and a 3-pointer and free throw from junior guard Kahlil McDonald made it 59-57 with 39 seconds left.

WKU then allowed 30 seconds to drain off the clock before fouling Stafford at the other end, and the Denver guard netted both free throws to seal the game.

“They got us in one of those situations you’ve seen us in this year, where we’ve got to dig down and try to come back from a double-digit deficit,” McDonald said. “That’s always tough.”

Denver shot 51 percent for the game and recorded 15 assists on 26 field goals.

WKU’s hot second half lifted it to 45.3 percent shooting for the game, but it had 11 turnovers and just six assists.

Pattillo led all scorers with 24 points and also had 11 rebounds. Kerusch finished with 13 points and 12 rebounds.

Pettigrew, Kahlil McDonald and senior forward Cliff Dixon each had six points. The only other scorer for the Toppers was sophomore guard Caden Dickerson, who pitched in four points.

Stafford led the way for Denver with 17.

The Toppers now have a full week off before traveling to Troy at 7 p.m. Thursday.

They’ve fallen behind the eight ball at 0-2 in the Sun Belt, but McDonald said he thinks they can still turn things around if they quit digging holes for themselves.

“You saw a totally different energy level at a certain point in the second half to give us a rally,” he said. “But we have to learn our lesson and understand that aggression level has to be there from the beginning of the game.”