N is for Night Owl 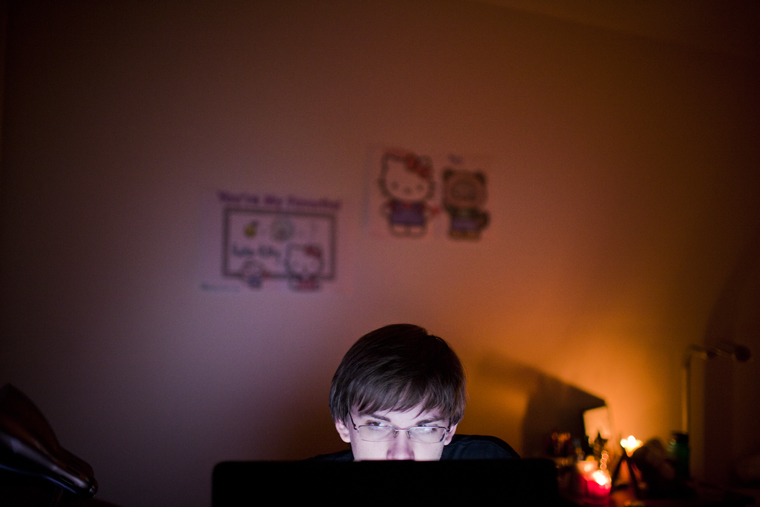 Monticello junior Ben Hutchison listens to music on his laptop in his apartment in the early morning on Tuesday before a long day of classes. Hutchinson, who rarely sleeps because of insomnia, often hangs out with friends and studies with the extra time that he spends awake.

While many students might stay up late partying or doing homework, Monticello junior Ben Hutchison stays up because he is a self-proclaimed insomniac.

Ben says he hasn’t been clinically diagnosed with insomnia, but he has all the symptoms and has had them for most of his life.

“I can fall asleep anywhere,” he said.

He’ll pass out on the floor, in a chair, anywhere.

One time when he was camping, he woke up in a tree on a branch 10 feet off the ground, he said.

On average, Ben stays awake at least 20 hours a day.

“The longest I have gone without sleep is five days, during midterms, except for a one-hour power nap,” he said.

He said he functions best after three hours of good sleep.

Ben’s roommate, Will Gallagher, has no problem with Ben’s late nights because he comes from a military family deployed to regions with different time zones.

“My body never adjusts to the time zones,” Gallagher said.

He said he averages 150 music downloads during a typical week, which he adds to his collection of about 20,000 songs on his computer.

Unable to sleep, Ben hangs out with friends at their houses and locals bars and clubs.

“If you’re going to be up, you might as well do something,” he said.

He said he can sleep easily in class, and he can’t pay attention.

He doesn’t often take night classes because they are too long for him to stay awake, and morning classes are too early.

So, he schedules classes for the afternoon.

“Getting my homework done isn’t a problem, though, because I have all the time in the world to do it,” he said.

Ben says he’s a really social person, and sometimes his insomnia gets in the way of socializing.

“Friends are awake during the day, so I don’t always get to talk to them or hang out,” he said.

He also rarely has a chance to enjoy outdoor hobbies such as hiking and kayaking.

But he said staying up late gives him time to do things without much interruption.

Ben thinks his insomnia started as a child, when his sister moved out.

He said his sister raised him, and it shook him when she left.

His mom tells him that finding him in the morning was like playing hide-and-go-seek.

Sometimes she found Ben asleep under the table, in the bathroom, in the living room or by his toy cars.

Because sleep deprivation depletes his body of essential nutrients, he said he takes lots of vitamins, and he keeps a sunlamp on most of the time to get more vitamin D.

“There are days that I don’t see the sun,” he said.