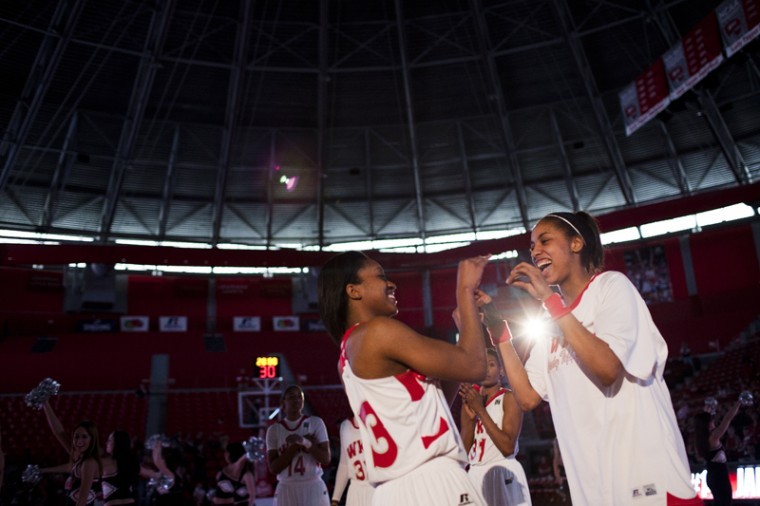 Junior guard Vanessa Obafemi (left) slaps hands with Jasmine Johnson as she is introduced as part of the starting lineup for WKU against Troy at Diddle Arena last Saturday. The Lady Toppers head to Florida for two games this week, a trip they said they'll use to bond.

The Lady Toppers’ past two games have arguably been their best this season.

They blew out their opponents in both games, outscoring them by a combined 165-122. WKU’s conference record also improved to 5-2 — certainly something positive for a team that’s admittedly underachieved this season with an 8-11 overall record.

“It’s just a different feel altogether,” Cowles said. “We’ll face a very complete FIU team that has a complete puzzle with a great perimeter game and a great post game. FIU is always a tough environment to play in.

“At the end of the week, we go and play an FAU team that we’ve already played once. But again, it’s on the road, so this is going to be a good test for us.”

The road hasn’t been kind to the Lady Toppers this season. They’re 2-6 on the road and have lost two straight away from Diddle Arena.

But they have numbers on their side for this road trip. FIU is 4-7 at home this season, and WKU leads the all-time series in Miami, 9-3. Cowles has also never lost to FIU in her previous eight seasons, posting a 17-0 mark.

But as Cowles and the players have often said this season, they’re not going to overlook any opponents — no matter what the circumstances.

“We can’t go into either game lightly just because they’ve struggled at home,” senior guard Amy McNear said. “We just need to stay focused, do what we need to do, and play our game. We can’t go into the games thinking we already have them won.”

Cowles said there are plenty of areas in which the team could improve, which is another reason it can’t take these two games lightly.

“We’ve got to do a better job with one-on-one defense, offensive execution, and understanding clock management,” she said. “Things like that, we’re still working on.”

But that doesn’t mean the Lady Toppers are unaware of what two more wins would mean for the complexion of their season.

Senior forward LaTeira Owens said it’s important that the team comes back from the road trip with something positive to focus on.

“We need to come back with two victories,” she said. “This is a long road trip, and every game is important to us. That’s what we’re focused on right now, as well as pushing our Sun Belt record further.”

Owens said the Lady Toppers are starting to understand each other more and are beginning to mold into the team they knew they were capable of being.

Owens said there are things that WKU must do in order to keep playing as well as it has been.

Owens said those include simply playing as a team and starting off strong. Until recently, slow starts have plagued the Lady Toppers.

“As long as we start off strong, we’ll be fine,” she said.

The players said the Florida swing is always a little difficult and unique for them.

Since they’ll be in Florida from Tuesday night until Sunday, McNear said they’ll have to look at it as a team bonding trip.

“Of course we’ll have some people who will bump heads. We’re women,” she said. “But it’s going to be fun, and we have to take it one day at a time and just be a team.”

Cowles said they won’t be taking any trips to Disney World or any other amusement parks like they have in years past.

Instead, she said the team will be focusing on basketball all week, which includes going to the men’s game against FIU on Thursday.

“That’s always fun and very helpful from a basketball sense to watch and evaluate and just stay in the mode of basketball,” she said. “But we won’t be going to Disney or any (Miami) Heat games — I can promise you that. There’s a WKU game on Thursday, and that’s where we’ll be.”