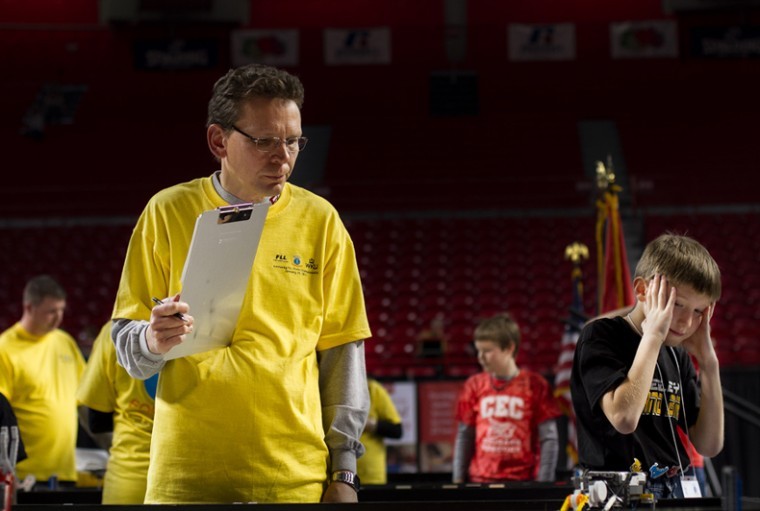 Today, the 2010 Kentucky First Lego League State Robotics Championship brought 400 students from all over Kentucky to WKU in order to compete with robots and work on team-building skills.

The event, which took place in both Diddle Arena and Downing University Center, was jointly sponsored by WKU’s science and math departments, according to program materials.

Curtlyn Kramer, a volunteer from Ashland, said one of the goals of the program was to help students learn how to engineer.

This year’s theme for the competition was “Body Forward,” which gave the students an opportunity to brainstorm a solution for a problem in the field of biomechanical engineering, Kramer said.

Students picked problems ranging from how to apply prosthetic limbs to how to increase battery life on cochlear implants.

The students, who ranged in age from 9 through 14, were told the theme in early September, and had been working since then, said John Inman, the event’s organizer.

Inman, who began his involvement in the program as a volunteer six years ago in order to support his son, said, “the greatest benefit of the event is that it helps young people get excited about the ‘STEM’ subjects (science, technology, engineering, and mathematics).”

Inman said the other important focus of the program was to expose the students to WKU’s campus.

“We want the brightest young minds in Kentucky to see what we have and the programs we have,” he said.

For more coverage of this event, check Tuesday’s Herald.