Campus Activities Board rings in December with holiday concert 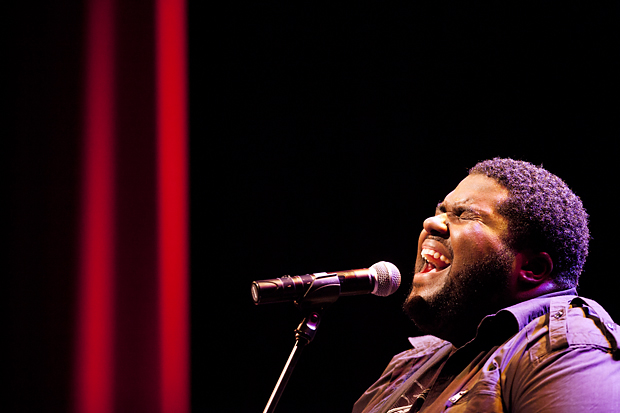 Atlanta singer and songwriter Chinua Hawk performs a gospel song during his set at the WKU Campus Activity Board's holiday concert in the Van Meter Auditorium on Wednesday evening. The WKU Amazing Tones of Joy also performed during the concert, which about 50 people attended.

About 50 people gathered in the auditorium on Wednesday evening for the Campus Activity Board’s holiday concert, which featured Hawk and WKU’s own gospel choir, The Amazing Tones of Joy.

Sylvia Reyes, a junior from Lawton, Okla. and president of CAB, said they organized the concert in hopes of getting people in the holiday spirit and helping them relax before finals.

The concert started with The Amazing Tones of Joy’s vocal performance, which featured songs such as “Silent Night,” “This Christmas” and others.

Hawk later took the stage, projecting his vibrant vocals out into the audience, who participated and sang along.

Hawk kept the crowd going having the audience repeat after him.

“I just wanted to see if y’all could sing,” he said.

Hawk said that when he performs he wants people to feel comfortable and sing along with him.

He sang songs by artists such as Michael Jackson and India Arie as well as some of his original music.

Darien Green, a senior from Louisville and the choir director of Amazing Tones of Joy, said he liked how Hawk used songs people know and made them into his own.

“I loved his voice, his energy and his presence,” Green said.

Along with the R&B entertainment that Hawk brought, members of The Amazing Tones of Joy wanted people to remember the meaning of the holiday season.

Green said music is a way to bring people together, adding that it’s important to keep holiday concerts around in order to inspire WKU students and the community.