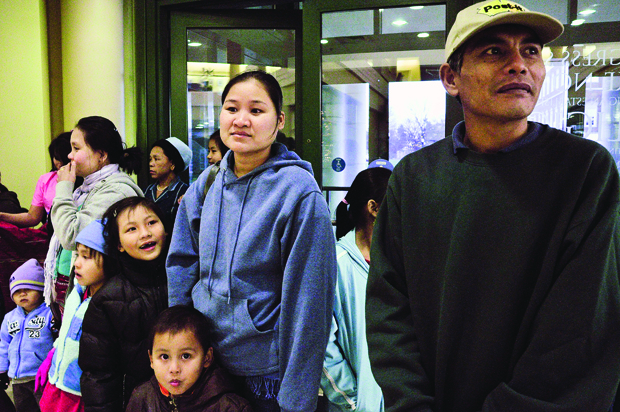 Burmese refugees arrive on a school bus to Mass Media Auditorium at about 5 p.m. on Wednesday for the “Forced From Our Villages: The Karenni Community Journey From Burma to Bowling Green” event. Refugees also prepared food to share with the students and community.

Buih, a Burmese refugee, fled his village in rural Burma 13 years ago when he was a teenager to escape the country’s military regime – the regime that would eventually murder his brother.

Like most of the 1,400 Burmese refugees living in Bowling Green, Buih relies heavily on his translator, Mu, to communicate with English speakers.

Buih, along with other Burmese refugees, took time to share some of his stories on Wednesday evening, when the WKU ALIVE Center, along with the WKU Office of International Programs, the Bowling Green International Center and DosVelas Pictures, presented “Forced from Our Villages: The Karenni Community Journey from Burma to Bowling Green.”

The event was meant to bring attention to the current humanitarian crisis in Burma and educate the university community on the importance of being considerate of refugees still adjusting to American culture, said Nadia De Leon, community engagement coordinator for the ALIVE Center.

“Refugees don’t have it so easy,” she said.

Buih told the crowd, through the translator, that he fled Burma when he was a teenager because he feared the Burmese military.

He said he traveled through the jungle and eventually made it to the Thailand border, only to see his brother killed by the regime.

Thailand currently hosts more than 145,000 refugees in nine camps along the country’s western border, according to the International Organization for Migration’s website.

Refugees have been fleeing Burma to go to the Thai camps since the 1980s, said Soleiman Kiasatpour, a WKU political science professor.

Buih said he spent 12 years in a Thai refugee camp before coming to America.

Through the translator, Kye, another Burmese refugee, said she has been in America for only nine months, but it has been difficult for her to adjust to the new culture.

American women have many responsibilities not expected of Burmese women, such as getting a job, she said.

He said transition into American culture is much easier if refugees take the time and effort to overcome the communication barrier they are faced with.

Mu has been living in Bowling Green for more than a year now and is one of very few local Burmese refugees who speak English well, said Jessica Leung, a documentarian with DosVelas Pictures.

Leung has been keeping in contact with Mu since she heard her story in a Thailand refugee camp in 2008. Mu was a refugee at the camp at the time.

She said Mu, like many other refugees living in Bowling Green, is Karenni, an ethnic minority from Burma that has its own language.

“Mu is practically the only Karenni translator in Bowling Green,” Leung said.

Mu is employed by the Warren County Health Department.

Leung said Mu is the first contact for many Burmese refugees once they arrive in Bowling Green.

“She is always on call for people trying to figure life in the U.S. out,” she said.

In addition to working at the Health Department, Mu also spends a few days a week working with local elementary schools and churches to ensure the Burmese refugees are adjusting to all areas of American life, Leung said.

Mu said her English skills helped her find employment in America, though she never had formal training in the language before coming to the U.S.

Mu said she now takes English as a Second Language classes at WKU.

Leung said Mu’s arrival opened a “floodgate of refugees” in need of assistance.

De Leon said a priority of the ALIVE Center is to promote English education and help refugees live independent lives in the U.S.

She said she hopes an upcoming ESL program, which is set to launch in spring 2011, will help to fix the communication gap many refugees presently face.

She said the event inspired her to help the people of Burma.

Hicks said she would like too see a better situation in Burma, but she understands American involvement is difficult from halfway around the world.

“It’s just really sad,” she said. “We don’t think about these things in America, like our houses being burned or being chased through the jungle.”

Hicks said she plans to be involved with a letter writing campaign.

The campaign focuses on securing basic human rights for the citizens of Burma, Kiasatpour said.

“We definitely need to do something,” Hicks said.

Kiasatpour, a featured speaker at the event, told the crowd of about 250 that the most meaningful thing Americans can do for the Burmese is to take action.

He also said while the U.S. government may not be directly involved, participation with the United Nations and aid-work from numerous non-governmental organizations have kept the Burma crisis in the forefront of American relief efforts.

“We have the responsibility to stop injustice,” Kiasatpour said. “We are involved, whether with the government or not.”

Joe Forsthoffer, corporate communications manager for Perdue Farms, said he has been directly involved with many refugee families, including Burmese, Bosnian and Serbian refugees.

“They go through the same application process as everyone else, but we are sensitive to the cultural differences,” Forsthoffer said.

Each family’s story is different, but it’s an emotional experience each time, he said.

“Hopefully, one day, it will be a better world,” he said. “The next generation will show the real difference.”