BG and Owensboro campuses to open at noon Monday 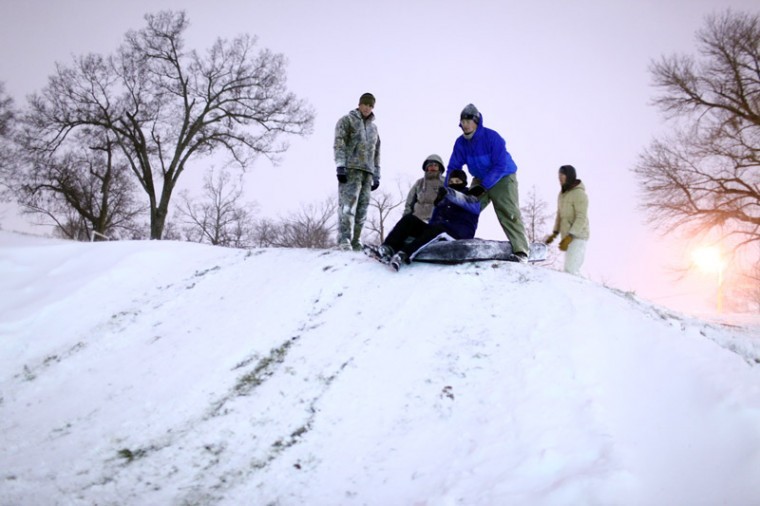 WKU students prepare to sled down Hospital Hill on an air mattress during Sunday's snow storm in Bowling Green.

WKU’s Bowling Green and Owensboro campuses will open at noon Monday, according to a WKU text message sent at 9:02 p.m. Sunday.

Monday morning’s finals are rescheduled for Wednesday at the same time, according to the text message. Monday’s finals starting at noon and later will happen as scheduled.

Officials have said the university will work with students who can’t come to campus for weather-related reasons.

The free breakfast in DUC’s Fresh Food Company is rescheduled for Tuesday from 7 a.m. to 9:30 a.m., according to the WKU News Blog.

McCaslin urged students to “use your best judgment.”

While many waited to hear about Monday’s finals being canceled, some students went outside on WKU’s main campus to enjoy the winter weather Sunday night.

Gott said she was somewhat upset when she heard her Monday morning final had been rescheduled.

“But I guess it gives me more time to study,” she said.

Duncan said she had some friends who will have to stay in Bowling Green longer now that some finals have been rescheduled to Wednesday.

Campus police have blocked off portions of College Street Sunday night as the winter weather has caused many accidents across Bowling Green. The blocked off portion is between 13th and 14th avenues, which leads up the Hill to Cherry Hall. The only road closing in the city was the one closed by the WKU police, a Bowling Green Police spokeswoman said, as of 10:30 p.m. Sunday. Dining locations on campus closed early Sunday night due to the weather. DUC Food Court and RedZone closed at 9 p.m. Papa John’s and DUC Subway closed at 10 p.m. As of 11 p.m., it’s 19 degrees in Bowling Green. It’s expected to continue snowing tonight and into tomorrow, with a high of 20 degrees, according to weather.com.