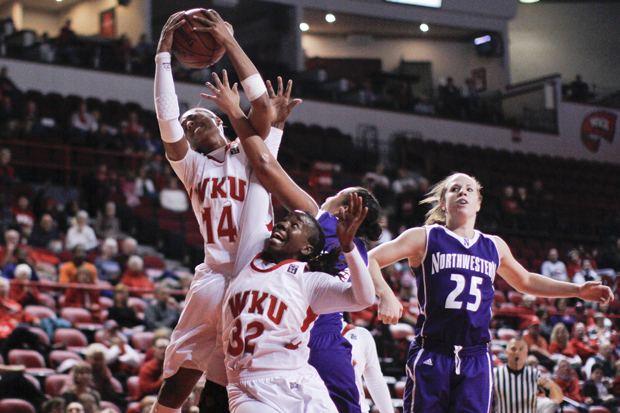 Sophomore forward Janae Howard grabs a rebound during WKU's home opener against Northwestern. Howard, like WKU, has lifted her play lately. The Lady Toppers head to Vanderbilt Tuesday as winners of three of their last four games.

Since returning home on Dec. 7 after playing five of their first six games on the road, it’s pretty much been smooth sailing for the Lady Toppers.

WKU won three of its last four games during a two-week homestand and is inching closer to the .500 mark with a 4-6 record.

Before taking eight days off for Christmas break, the Lady Toppers will have to continue their winning ways on the road against Vanderbilt (7-3) at 7 p.m. Tuesday.

It won’t be an easy task, though. Vanderbilt is 6-0 at home this season, and the Lady Toppers are 4-11 when playing against them in Nashville.

But senior forward Arnika Brown said they’re using last year’s loss at Vanderbilt — a six-point overtime thriller — as motivation to pick up their fifth win before the long break.

“You can’t do anything but be motivated,” she said. “We went down there, and we fought, and we know it’s going to be an even bigger and better fight come Tuesday.”

“We’ve got to focus and really buckle down on this one,” she said. “But our young ladies see that we’re improving and getting better, so our confidence increases with each win.”

The Lady Toppers will have to do it at Vanderbilt’s Memorial Gymnasium, which provides some problems because of its unusual layout. The playing floor is elevated, and the team benches are located at the ends of the floor as opposed to the traditional sideline spot.

Additionally, there is extra space on the sidelines, and the shot clocks are located below and to the right of the goals instead of above them.

“That’s the most ugliest gym I’ve ever seen in my life,” Brown said. “I would rather play at Diddle Arena every game. But at the end of the day, they have two basketball goals just like the rest of them do.”

Adding to the difficulty will be the statistical comparison, in which Vanderbilt has the edge in just about every category. Vanderbilt is averaging more than 76 points per game and holding opponents to 64 per game.

WKU is averaging 61 points a game and has scored more than 70 just twice this season.

Vanderbilt is also shooting nearly 10 percent higher from the field and has limited its turnover count to just over 16 per game, while WKU is averaging more than 20.

The turnover problems have been there all season for the Lady Toppers, and Cowles said the goal is to keep that number to 15 per game or less.

But on the other hand, rebounding has been the biggest strength for the Lady Toppers all season and percentage-wise, they hold a six-rebound advantage over Vanderbilt.

WKU will also have the improved play of sophomore forward Janae Howard on its side.

Howard saw limited action prior to last Sunday’s game against Grambling State and was shooting just 30.9 percent from 3-point range. But she bounced back against Grambling, hitting seven 3-pointers and scoring 26 points.

Howard had one 3-point shot hit just about every part of the rim before falling down and then banked in another from the corner.

“I’ve never been that lucky in my life,” Howard said. “Every time it went up, it went in. I was like, ‘Wow.’ I was blessed tonight. The last few games I’ve been in a funk, but I’m trying to get back.”

Howard said she had also been dealing with a calf injury which affected her shot some, but she said she feels fully healthy after resting it during their week off for finals.

But even with the resurgence of Howard, Cowles said in order to win at Vanderbilt, the Lady Toppers have to fix the problems they’ve been dealing with lately.

“They realize that there are some things that they aren’t doing real well, so we’ve got to buckle down,” she said. “Hopefully we can continue with this momentum on Tuesday night. It would be a great early Christmas present.”