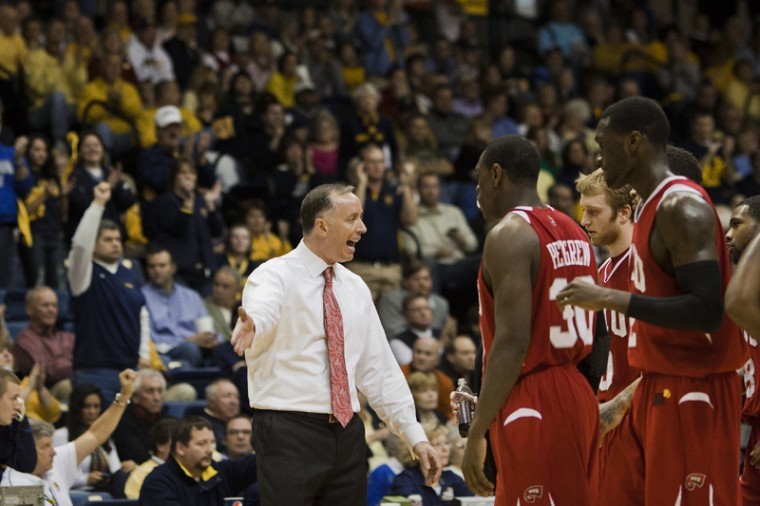 For the first time since 1990, Louisville returns to Diddle Arena. WKU (5-6) hosts the Cardinals, who are ranked 25th in the USA Today/Coaches Poll, at 7 p.m. Wednesday.

For the first time since 1990, Louisville returns to Diddle Arena.

The Bowling Green Daily News reported Tuesday that the game is officially being called a sellout. Just 1,500 student tickets were available for the game, as students stood in line weeks ago to receive a voucher.

For those who can’t be at Diddle, the game will be televised on Fox College Sports and DirecTV channel 617, according to WKU media relations.

It will also be broadcast locally on WKYU-PBS in Bowling Green and WKYI in Louisville.

The Herald will also be running a live blog from the game.

Here’s everything you need to know about Wednesday’s contest:

— Louisville (9-1) is the first ranked team to come to Diddle since No. 9 Xavier visited in 1997. The Cardinals are coming off a 78-49 win over Gardner Webb last Saturday. Their lone loss of the season came at home to Drexel.

— A Louisville press release issued Wednesday said that sophomore guard Mike Marra sprained his ankle in practice Tuesday and will not play against WKU.

Louisville Head Coach Rick Pitino told reporters Tuesday that freshman guard Elisha Justice will not be available because of a concussion. Pitino said that sophomore forward Rakeem Buckles, who was previously out with a concussion, will play.

Buckles has averaged 7.7 points and 7.8 rebounds this season.

— The Cardinals are led in scoring by senior guard Preston Knowles’ 13.6 points per game. Sophomore guard Peyton Siva is averaging 10.4 points and 4.4 assists per game.

— The Toppers are trying to rebound from a 69-60 loss at Murray State last Saturday. They had previously won two straight games against Bowling Green State and Southern Illinois.

— McDonald told the Daily News that senior forward Juan Pattillo, who came off the bench for the first time this season at Murray, has continued to progress since. Pattillo missed practice early last week because of what McDonald called “personal” issues.

Pattillo leads WKU with 13.8 points and 10 rebounds per game, and Pitino called him “as good an athlete as we’ll see.”

— WKU hasn’t beat a ranked opponent at home since 1986, and the Toppers haven’t defeated Louisville in Diddle since 1950. But they’re 6-0 in non-conference home games in December during McDonald’s tenure, and Pitino said he expects a challenge.

“They’ve got a strong home-court advantage, Western Kentucky,” Pitino said. “They’re very quick on the perimeter, they offensive rebound terrific, and they play for steals. So it’ll be a good test, going on the road before we get into the Big East.”