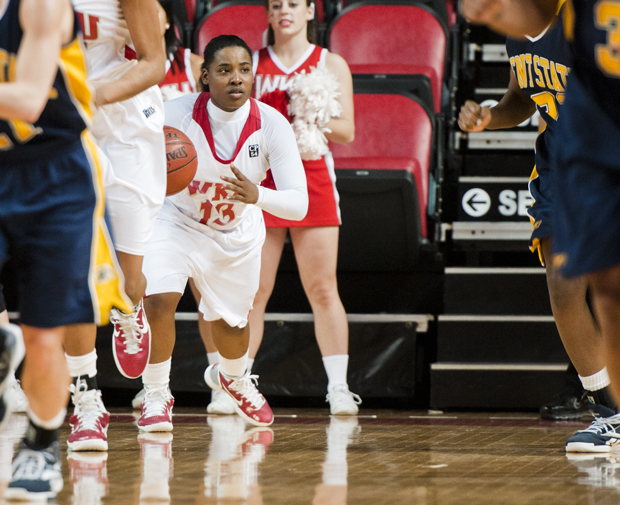 Senior Hope Brown has moved from point guard back to shooting guard now that senior Amy McNear has returned to the Lady Toppers' lineup. Since then, Brown has averaged almost 10 points per game. NOTE: Jonathan says he wants to add a stat to this.

The season didn’t start off well for seniors Arnika Brown and Hope Brown.

Arnika Brown, a preseason all-Sun Belt first team selection, was limited in action due to a hamstring injury and a stomach illness and didn’t make much of an impact in the Lady Toppers’ first game against Louisiana Tech. She played just 13 minutes and did not score a point.

Hope Brown, naturally a shooting guard, was forced to take over the point guard role when senior Amy McNear was suspended for the first three games for violating team rules. In those first three games, Brown averaged more turnovers than points and was never able to get comfortable on the court.

“Those first three games were brutal,” Head Coach Mary Taylor Cowles said regarding Hope Brown. “She just simply had to fill a role because we needed it.”

But now McNear is back at the point guard position, allowing Hope Brown to switch back to her familiar spot as shooting guard. As for Arnika Brown, she said her early struggles are behind her, and she’s starting to feel more comfortable each game.

It was the Brown duo that was at the center of the Lady Toppers’ recent turnaround, highlighted by back-to-back wins against Troy and Kent State. Arnika Brown scored 26 points and pulled down 16 rebounds, while Hope Brown scored 12 points to help the Lady Toppers beat Troy.

“I’m just more or less calming down and letting the game come to me,” Arnika Brown said. “I’m working hard inside, and our guards are getting us the ball. I’m just starting to get the feel back.”

After Tuesday’s game against Kent State, she was averaging almost 10 points a game in that stretch — compared to her 7.5 point average before. More important for the Lady Toppers, her turnover average took a U-turn. She’s averaging 1.5 turnovers a game compared to eight when she was point guard.

Hope Brown said she feels less pressure now that she doesn’t have to worry about running the offense and can do what she does best: score.

“I’m comfortable now that I’m back at the two guard,” she said. “I’m starting to find myself and getting back to my original self.”

Cowles said having Hope Brown back in the shooting guard position has allowed her take a deep breath because point guard isn’t her natural position.

“Hope’s not a point guard for us,” Cowles said. “What we’re seeing out of Hope now is not a surprise. It’s definitely what we know she’s capable of doing.”