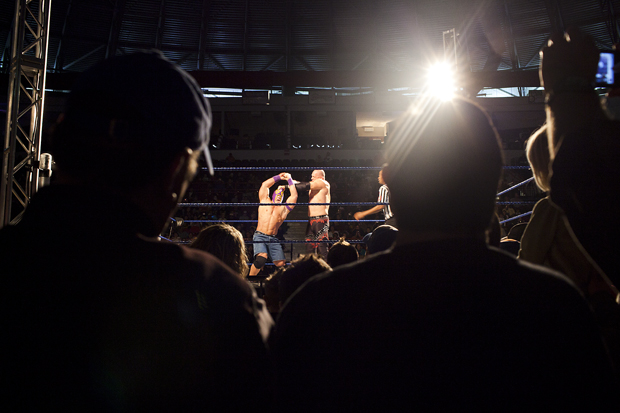 World Wrestling Entertainment wrestler Kane tries to pull off a lucha libre mask worn by John “Juan” Cena during a WWE match at Diddle Arena. The non-televised event is a break from bigger shows. Fans can get a more intimate experience with superstars such as The Miz, The Undertaker, Triple H and more.

Cheers and jeers filled Diddle Arena Sunday night when World Wrestling Entertainment made a stop at WKU on its world tour.

John Cena, Kane, John Morrison and Sheamus were just some of the WWE wrestlers in attendance.

The event was what wrestling fans refer to as a house show, or a show that isn’t televised.

Louisville junior Chase Woods describes himself as a lifelong wrestling fan and said his favorite match of the night was Morrison versus Sheamus.

“It’s good to go out to the little house shows without all the glitz and glamour and the soap opera aspect of it,” he said. “You just get to watch the wrestling, it’s fun.”

Students weren’t the only fans in attendance.

Chris White, a 28-year-old Bowling Green native, has been a wrestling fan since he was a kid and said he prefers to watch the sport live.

“It’s nice being in a small town, because you get to see it up close,” he said.

Fans packed themselves in to the area that the wrestlers walked out of when Morrison made his entrance, reaching out their hands and hoping to get a high five.

He and Sheamus had fans on their feet with near pins and risky maneuvers in their 20-minute match. Ultimately Morrison won, which sent the crowd in to a frenzy.

The loudest cheers of the night came when Cena made his way out to the ring wearing a Mexican wrestling mask.

He was announced as “Juan Cena” and played up a faux-Mexican persona complete with Mexican-style entrance music.

His opponent, Kane, took the microphone and said that even though the residents of Bowling Green weren’t very smart, they were smart enough to tell that it was obviously Cena under the mask. He then threatened to tear off the mask, and the match began.

Cena played to the crowd and knocked Kane around, but just when it seemed he was going to win, members of the wrestling group Nexus stormed the ring and attacked Cena. Kane was disqualified, and after the match the members of Nexus beat on Cena and took his mask off.

Cena battled out and beat down Nexus, sending them running backstage. He then got out of the ring and walked up and down the aisles giving high fives.

Hopkinsville junior Bethanie Melander came for Cena and was very happy to see him get the upper hand on Nexus. She said her favorite part of the night was when Cena took his shirt off.

After the show, she and some of her friends sat outside with a Cena sign, hoping to meet the wrestler.

“This is the best time I’ve ever had at this school,” she said.