McDonald: Tops had ‘enough time to settle in’ before Sun Belt play 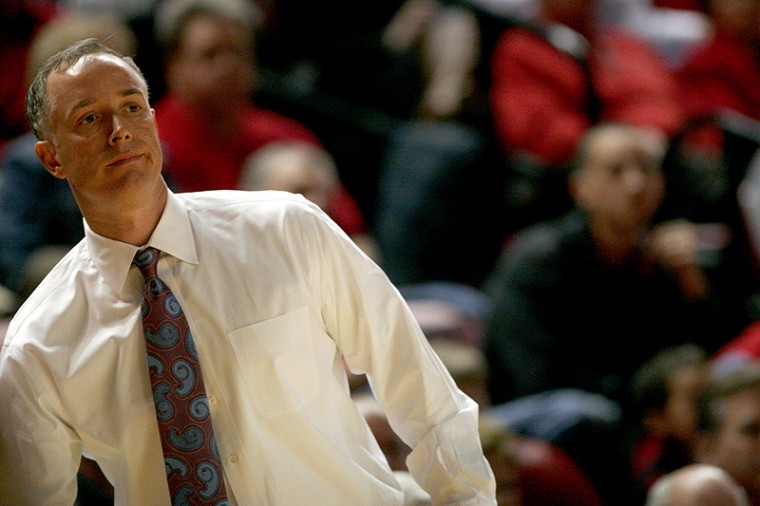 Head Coach Ken McDonald looks out onto the court during the first half of the game against the University of Louisville on Dec. 22. The Toppers enter 2011 and Sun Belt Conference play at 5-7.

During one of WKU’s recent practices over Christmas break, Head Coach Ken McDonald asked the players how many of them have ever won a championship.

Only two Toppers raised their hand.

That inexperience has plagued WKU (5-7) this season, but with Sun Belt play beginning this weekend, McDonald said he hopes he can give several players their first taste of a title.

“It’s been enough time to settle in, and I do have expectations that these guys take it to another level come conference play,” McDonald said Thursday. “That’s why this week was an important week.”

The Toppers begin conference play at Arkansas State at 7:05 p.m. Saturday. They’ll have had over a week off since taking a 114-82 drubbing at home against Louisville on Dec. 22.

McDonald said the team has run double practice sessions throughout most of the break, and that there hasn’t been a “peep of negativity.”

“It’s a process,” he said. “You don’t correct all of your deficiencies in one practice, but you have to take the steps in the right direction. We’ve done that this week.”

McDonald also had former WKU coach Jim Richards talk to the Toppers this week, which McDonald said helped bring a new voice to the same message.

“Him talking about conference play and putting stuff behind you and going forward was really interesting,” McDonald said. “I also asked for his perspective of this team right now and what he sees out there on the floor, and what has made teams great here in Western history.”

WKU went 3-0 against Arkansas State last season, including two wins by a combined three points. The final meeting last year came in the second round of the Sun Belt tournament, when the Toppers won 65-64.

Arkansas State is led in scoring (13.7 points per game) and rebounds (6.4) by junior forward Martavius Adams. The Red Wolves dropped their first five games this season but have gone 5-3 since.

They also took Memphis to the wire nearly a month ago before falling in overtime.

“They have a core group of guys,” McDonald said. “They’ve got some big horses inside and some good athletes. They’re a team that’s played us tough. I think they’ve looked forward to this developing rivalry, so to speak. They did lose their big scorer from last year, but I think some other guys have stepped up, and they have some other guys that’ll create a challenge for us.”

The Toppers enter 2011 having played a non-conference slate ranked 50th in the country, according to CollegeRPI.com. The average RPI of the seven teams they’ve lost to is 50.

McDonald said he could have eliminated two of the difficult games on the schedule and allowed WKU to enter the Sun Belt at 7-5, but he thinks the trial by fire will ultimately pay dividends.

It just remains to be seen if it’s enough experience to give most of the Toppers their first championship.

“With who we’ve played, we haven’t been able to generate confidence, especially stringing together any confidence,” McDonald said. “We haven’t had a stretch of time where we’ve had opponents that we can gain some confidence. That’s life. That’s it.

“We’ve put ourselves in that position, and hopefully it pays off come conference time.”