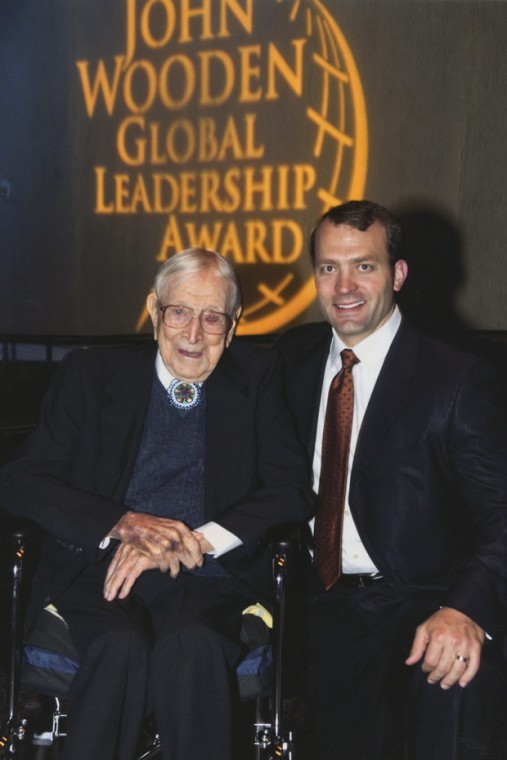 Bjork prominently displays in his office an autographed, personalized print, which includes 15 building blocks ranging from “friendship” to “ultimate greatness.”

Wooden’s concise definition of success entails the satisfaction of knowing you tried your hardest to become the best you can be.

“I think that definition of success is really the ultimate achievement,” Bjork said. “If you can get to that point, then that’s the ultimate pinnacle of winning and losing and success.”

Wooden, who won 10 NCAA Men’s Basketball Championships as the head coach at UCLA, died in June, four months shy of his 100th birthday.

The pyramid’s importance hinges on its recognition of the value of effort and hard work, said Bjork, WKU’s first-year athletic director.

Bjork came to the Hill from UCLA, where he spent five years as senior associate athletic director for Development and External Relations.

He oversaw many aspects of fundraising, including the Wooden Athletic Fund, which led him to a personal relationship with Wooden.

Bjork recalled his first meeting with Wooden as a member of the UCLA family, which he said involved “a great sharing of who I was, who he was.”

Bjork said he and Wooden met once before, but their first sit-down conversation made him nervous.

“It was just kind of awe-inspiring just to sit and listen to him talk in such a casual and informal manner,” Bjork said. “But there was nothing casual or informal about the dialogue because everything he talked about was he was always teaching something.”

Bjork asked Wooden for advice as the new guy in town.

The Wizard of Westwood told him that he would want to do everything at once.

“The No. 1 thing is patience, having a plan and working hard,” Wooden told Bjork.

During their final meeting almost five years later, as Bjork was preparing to take charge at WKU, Bjork said he asked “Coach” for advice on entering his first athletic director position.

UCLA Athletics Director Dan Guerrero said in an e-mail that Bjork is a “student of the business” and that Bjork saw Guerrero make both swift and deliberate decisions.

“Since Ross was a member of the senior staff, he was engaged in a number of important issues and decisions,” Guerrero said. “He had the benefit of seeing it done in both ways.”

He said Bjork was given “a very expansive span of control” at UCLA “that required strong organizational and communicative skills” — reasons why he’s confident Bjork will do a great job at WKU.

Bjork said people often try to complicate the tasks for an athletics department, which  don’t need confusion added to challenge.

He mentioned Guerrero’s cautious approach and said UCLA’S results speak for themselves.

“That tells me that if it can happen at UCLA and with John Wooden, then you can apply those same things in how we run things,” he said.

He told the media during his introductory press conference that how something is produced is more important than the product itself.

In his first convocation with WKU’s student athletes, Bjork told them that if they go to class and study, act responsibly and play and train hard, success should follow.

“Of course we want to win, cut down the nets and all those types of things, but if we cut corners to get there or without integrity, then it’s not worth it in my opinion because it could crush — fall very quickly,” he said.

Bjork was able to use a pillar of Wooden’s pyramid to encourage Willie Taggart, WKU head football coach, after the Toppers’ Oct. 16 home loss to Louisiana-Monroe.

Wooden’s website states: “There is no substitute for hard work. None. Worthwhile things come only from real work.”

Bjork said he wanted to remind Taggart to stay the course and not rush to judgment or panic.

Taggart said he shared the quote with his team.

“Our team needed that,” Taggart said. “Whenever you can get anything from someone that’s been highly successful, it always helps.”

As Bjork faces the challenges of being a first-year athletic director, Wooden’s pyramid of success is something he’s sure to keep in plain view.