WKU gets ’embarrassed’ in 82-62 loss at Vanderbilt 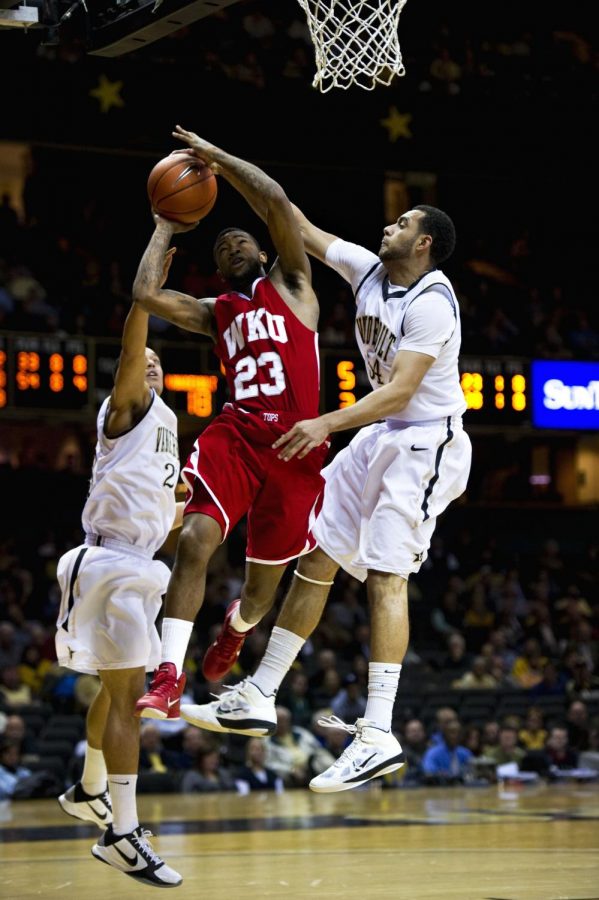 Freshman guard Brandon Peters gets blocked by Vanderbilt forward Andre Walker during WKU's 82-62 loss to the Commodores on Wednesday night.

Those were some of the words Head Coach Ken McDonald used to describe WKU’s effort Wednesday night at Vanderbilt.

The Toppers (3-4) turned the ball over 16 times in the first half, fueling what became a 82-62 blowout loss at the hands of the Commodores in Memorial Gym.

“We didn’t play close to half a game,” McDonald said. “I’m mostly disappointed in that. I told the guys that anyone that came down, I’m going to write them a check for the gas money to come down here. It’s not right, and we’re going to change that.”

WKU had six turnovers in the first four minutes of the game and recorded just one more point (17) than they did turnovers before the break.

The Toppers finished the game with 22 turnovers and just 14 assists.

“Looking back on it, I don’t think we can take too much positive from it,” senior forward Juan Pattillo said. “We prepared the last couple days, and we didn’t come out with no pride, no sense of urgency, no energy. The effort was terrible. We just didn’t compete tonight.”

The Toppers also shot just 28.6 percent from the field in the first half, and they allowed Vanderbilt (6-1) to shoot 52.6 percent for the game. The Commodores made 11-of-23 3-pointers.

WKU never led in the game, and Vanderbilt stretched out a 12-point lead in the early going.

A layup by senior forward Sergio Kerusch pulled the Toppers within 19-10 with 5:59 left in the first half, but the Commodores got some separation with a 16-3 run that included five 3-pointers.

WKU got back-to-back baskets from sophomore guard Caden Dickerson and Pattillo to end the half, but the Toppers still entered the break facing a 35-17 deficit.

“The first few minutes, we got down, and we hung our heads,” Kerusch said. “In a basketball game, when you make a few mistakes, you can’t afford to hang your head. It’s still anybody’s game. That trickled over and had an effect through the whole game.”

A basket and free throw by Pattillo got WKU back within 13 with 17:12 remaining, but Vanderbilt sophomore guard John Jenkins answered with five straight points, and the Toppers never came any closer.

Jenkins scored a game-high 21 points, knocking down five 3-pointers. But the Commodores were able to spread the wealth.

Vanderbilt recorded 23 turnovers itself but had 23 assists to go with them. Junior center Festus Ezeli scored 14 points and was a perfect 7-of-7 from the field, Jeffery Taylor added 13, and Rod Odom had 11.

“They were very consistent throughout the game,” McDonald said of Vanderbilt. “I don’t think they stepped outside their roles, and we, for whatever reason, didn’t really play as a team.”

“It’s disappointing. I’m disappointed in myself, the team,” Pattillo said. “I’m disappointed, man. We didn’t want it bad enough and we didn’t fight. I don’t even know if we wanted to win tonight.”

Pattillo paced WKU with 18 points and seven rebounds, but he had five turnovers with no assists. Kerusch and Dickerson each had 12 points.

The Toppers have a quick turnaround now, and a difficult one at that. They play at No. 14 Memphis at 7 p.m. Saturday, and McDonald said it’s gut-check time if WKU is going to be competitive in that contest.

“I was embarrassed, and I said that anybody in that game should be embarrassed,” he said. “We’ll look hard in the mirror, and hopefully the guys see a situation where they’re like, ‘God, I can’t believe I did that, and I’m not going to do that again.”