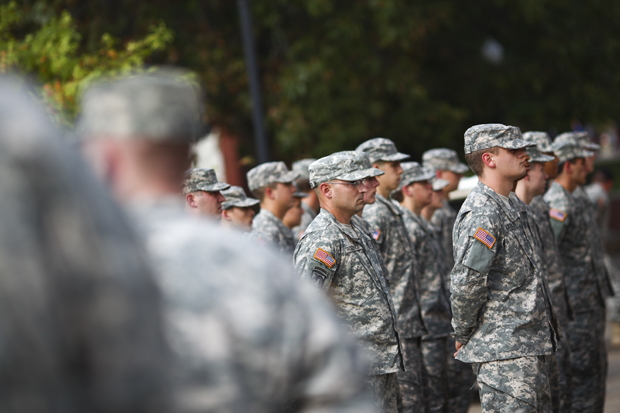 ROTC Cadets stand in formation at the foot of the Guthrie Bell Tower during a memorial service for 1st Lt. Eric D. Yates on the South Lawn of Western Kentucky University on Thursday, Sept. 24. LUKE SHARRETT/HERALD

WKU was recently recognized as one of the nation’s top military-friendly colleges.

And this summer, veterans at WKU gained an additional resource with the founding of the university’s chapter of the Student Veterans Alliance.

WKU was named an honoree for Top Military-Friendly Colleges and Universities by Military Advanced Education last month, according to a WKU press release.

WKU is approved by Veterans Affairs, who awards credit for military training and experience and offers tuition assistance for military students and dependents, according to the release.

WKU also serves active-duty soldiers and their families through an office on post at Fort Knox, according to the release.

Susan Esters, a marketing specialist for the Division of Extended Learning and Outreach, said WKU’s profile on militaryfriendlyschools.com shows the kind of criteria that Military Advanced Education uses to rank schools.

The website, which is not associated with the publication, rates WKU positively for providing financial assistance to military students and veterans, offering flexible scheduling and having a student veteran’s club on campus.

Peterson, a veteran of the Navy, said he has a lot of plans to help veterans transition into the classroom environment.

A long-term plan of the organization is to have classes for veterans only, taught by veteran faculty members, Peterson said. This will make student veterans feel more comfortable, he said.

Veterans at WKU currently get assistance from the department of Veterans Affairs in the Financial Aid office, but there isn’t a university-wide program to help veterans transition into college life.

The organization currently has five members, he said.

Several faculty members at the Elizabethtown/Radcliff/Fort Knox Campus of WKU have asked the SVA to expand to the regional campus, he said.

The WKU office at Fort Knox acts as a liaison between military members and the university, according to the release.