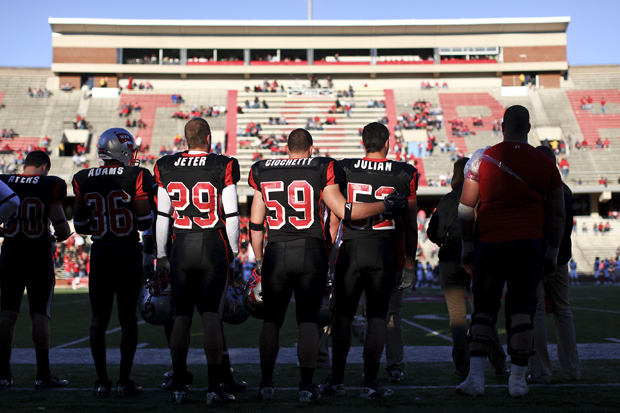 There was no beating around the bush for Head Coach Willie Taggart on Saturday night.

After  a reeling North Texas team came in and handed WKU a 33-6 loss on Homecoming, Taggart knew exactly how he felt.

The media never got the chance to find out how embarrassed the Toppers (1-7, 1-3 Sun Belt Conference) were Saturday night. Media relations informed reporters after Taggart left that no players would be available.

Taggart also said that the team would be up for a “full practice” at 6 a.m. Sunday so long as the NCAA would allow it.

“We’re going to work at it and see to it that we don’t put another performance like that out there again, ever,” he said.

After WKU beat Louisiana-Lafayette 54-21 two weeks ago to break the Toppers’ 26-game losing streak, Taggart said an apology was in order for the letdown against the Mean Green.

“I apologize to our fans and our alums because I really thought our team was going to come out here and play well for everyone, especially after the greeting that we got last week,” Taggart said. “They didn’t do it, so I apologize.”

The 14,373 fans at Houchens-Smith Stadium — the smallest home crowd this season — watched WKU take an early 3-0 lead, but the Toppers only got a second field goal from freshman kicker Monte Merrick the rest of the way.

North Texas controlled the game with 311 rushing yards, including 215 from star running back Lance Dunbar. Dunbar also had three touchdowns in the game.

But Taggart, being an offensive man himself, was quick to deflect some of the responsibility for Dunbar’s big day from the defense.

“If you keep your defense out on the field that long, they’re bound to give up some big plays on you,” Taggart said. “We didn’t help our defense at all offensively — at all.”

Taggart was short and decisive with his blame for the loss. He said the receivers “hurt” the team, junior kicker Casey Tinius had missed enough field goals to be replaced, and the defeat did not fall on sophomore quarterback Kawaun Jakes’ shoulders.

He also said it was the first time all year that the Toppers had quit during a game.

But after sounding off for over eight minutes on the team’s effort, Taggart paused before speaking.

“It’s a young football team,” Taggart said. “That win last weekend got everyone excited, and it should. But it’s a process of rebuilding our football tradition. You don’t like losing at all, but we’re going to stay the course.”

Taggart said Saturday’s loss was part of the Toppers “learning to handle success.”

And WKU’s practice at 6 a.m. Sunday would be the first lesson of many this week, Taggart said.

“We’re going to work a little harder, but we’re not going to steer off course,” he said. “The one thing I will hold them accountable for is their effort.”