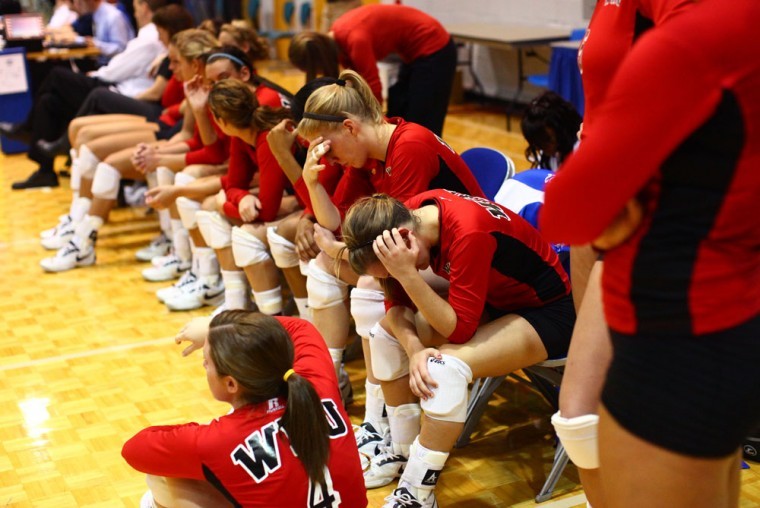 The Lady Toppers mourn their 3-1 loss to Middle Tennessee in the championship round of the 2010 Sun Belt Conference Volleyball Tournament Saturday night, Nov. 20, 2010.

Follow along with the Herald’s coverage of the Sun Belt volleyball tournament championship game between WKU and MTSU live from Murfreesboro. The match is set to begin at 7:30 p.m. CT.

MTSU wins 3-1 over WKU in the SBC championship match.

Paige Wessel makes it 19-16 MTSU with a kill. MTSU leads 19-15 over the Lady Tops. WKU has pulled within three now to MTSU.

Timeout WKU. Blue Raiders make it a six point game over WKU. Error on Teegarden makes it 15-10 MTSU. Middle up by four, making score 12-8 over Lady Tops. WKU back within two at 10-8.

WKU has only a .165 hitting percentage in the match. Lady Toppers pull within two now on MTSU attack error. WKU now down by three, 8-5 to MTSU.

WKU now down 7-3 in game four against the Blue Raiders.

MTSU leading now 3-1 after a kill from Izabela Kozon over WKU.

The Blue Raiders lead 2-0 over the Lady Toppers. The night before MTSU dropped game three to North Texas, but still made it out with the win.

WKU forces a fourth game in championship, winning game three 25-23. This will be the first time this season that WKU has not been swept in three games against Middle Tennessee.

The Lady Toppers have 14 errors compared to MTSU’s 18 at this point in the match.

Hudson has been asking for “composure” all week. Matchpoint now. 24-21 WKU.

Important lead for WKU now, Elmore makes it 22-20 over MTSU.

MTSU crawling its way back with a 19-17 score now. WKU leads.

WKU up three now over MTSU. Middle Tennessee takes timeout after another attack error. That’s 15 errors for MTSU and 11 for WKU.

Jordyn Skinner delivers a kill to make it a 3-2 game now. MTSU now with a 3-1 lead over the Lady Toppers.

Middle Tennessee starts game three with a 1-0 lead over the Lady Tops.

Jordyn Skinner makes it a one point lead again for WKU.

WKU takes one point lead on attack error by MTSU.

Lady Tops back within one again on MTSU attack error. MTSU holds off WKU attempted comeback, the score is now 17-14 MTSU.

Jordyn Skinner, who has been quiet in this second game, gets a kill to make it 15-14 MTSU.

MTSU is now leading 14-10 over the Lady Toppers.

Service errors are not helping WKU, score is now 11-8 MTSU.

Timeout WKU on floor after MTSU makes it 10-7 over WKU.

Blue Raiders take a 8-7 lead over WKU off attack error on Williams.

Score tied at 6 all.

WKU takes its first lead of the set off a MTSU attack error, 5-4 WKU.

WKU evens score now at 4 all.

MTSU has opened up a 3-0 lead over the Lady Tops to start the second game.

Denied once again, but MTSU takes first game at 25-21 over WKU. The Blue Raiders have 18 kills compared to WKU’s 13 kills. Hostile crowd continues pouring in with the MTSU band and cheerleaders arriving now.

MTSU going for matchpoint now at 24-19 over WKU.

Middle Tennessee grabs the lead now, 18-16 over the Lady Tops.

Freshman Melanie Stutsman seems to be the difference maker tonight, another kill for her, ties match at 15 all.

WKU timeout on floor. The Lady Toppers looking rattled now as MTSU takes a one point lead in game one. WKU now hitting a .389 percentage while MTSU has a .333.

Freshman Melanie Stutsman earns her third kill of the night; the score is now 14-12 WKU.

WKU is maintaining a 13-10 lead over the Blue Raiders, with a very hostile crowd enviornment.

Junior Lindsay Williams earns third kill of the night as WKU leads 10-6, which is its largest lead of the game so far over MTSU.

The SBC Freshman of the Year, Melanie Stutsman, gets a kill; score is now 5-5.

Score tied at 4 all after an attack error on WKU.

Senior Kelly Potts steps in after a Paige Wessel kill. A block from Tiffany Elmore gives WKU a 3-1 lead over MTSU.

But an easy kill comes for MTSU to tie the score one all.

The Lady Toppers take the first point of the match off a kill by sophomore Jordyn Skinner.

Five minutes away from the start of the SBC championship match between WKU and Middle Tennessee in Murfreesboro, Tenn. at Alumni Memorial Gym.

If WKU (27-7, 14-2 Sun Belt Conference) can get a win against the Blue Raiders, it will be its first of the season after being swept earlier this season on Oct. 5 in Murfreesboro and Nov. 12 in Diddle Arena.

The Blue Raiders, the first place seed in the tournament, finished round two 3-1 against North Texas.

The Hudson Hillraisers, WKU’s volleyball student fan group, have made the trip as well, with a fairly large cheering section for WKU. The MTSU band has not yet arrived from playing at the football game in Bowling Green earlier today.

It will be crucial for the Lady Toppers to get the win in the first game if they want to win the match; a problem they’ve had all season.

Also key to watch is the number of errors that are committed by WKU.