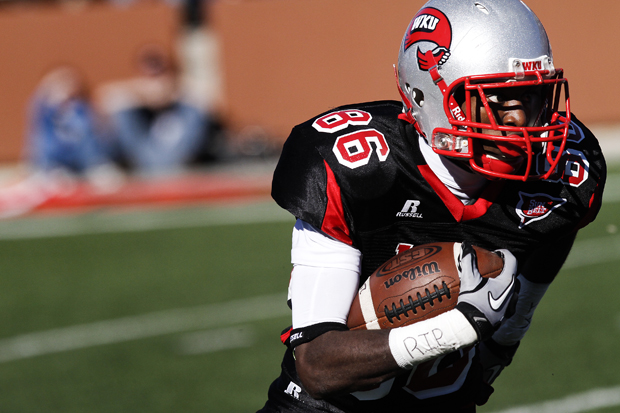 So with the theme of learning from mistakes in mind, the Toppers (2-8, 2-4 Sun Belt Conference) decided to take matters into their own hands Saturday at Arkansas State.

After blowing a 21-7 lead in the fourth quarter, WKU scored a game-tying touchdown with no time left in regulation and completed a two-point conversion after a score in overtime to upset ASU 36-35.

The Toppers were within striking distance late in each of their first four Sun Belt losses but never got over the hump, a trend Head Coach Willie Taggart was getting tired of seeing.

“Our team did something that we haven’t done all year,” Taggart said. “One thing our football team was missing was being able to come from behind and win a ballgame.”

When sophomore quarterback Kawaun Jakes failed to convert a fourth-down run late with WKU trailing 28-21, it looked like the Toppers would be designated to the same old fate.

But a botched ASU punt with 54 seconds left gave the Toppers new life, and Jakes managed to hook up with freshman receiver Willie McNeal for a seven-yard touchdown with no time on the clock.

Taggart wanted to go for a two-point conversion and the win right then, but a penalty made him opt for the extra point.

ASU scored on its first play in overtime, but junior running back Bobby Rainey answered for WKU with a three-yard touchdown run.

“The way our season has been going, I thought, ‘Why not?’” he said. “We needed a spark, and our guys wanted it.”

The play was a reverse around the left end to junior cornerback Derrius Brooks, who dove into the end zone and was ruled in after several minutes of review.

“I told him I know my speed, and I know what I can do, whether it’s on a reverse or a pass play,” Brooks said. “Anything for the Tops — anything to get a win.”

The Toppers did do a little bit of everything.

But more important was that the team showed poise when ASU’s poor punt snap cracked the door back open.

“We learned that we’re always in the game,” Jakes said. “’Believe’ is the word of the year, and we showed it today.”

The Toppers controlled the clock for almost 21 more minutes than ASU and had just one turnover.

But the bottom line was they needed a comeback.

And after coming up empty time and time again this season, Taggart said they finally learned how to deliver Saturday.

“You think about those games we had earlier in the year,” he said. “We had to come from behind in those, and we just didn’t do it. It was huge for this young football team to get some confidence so that the next time we’re in this situation, no one panics, and we don’t get down.”