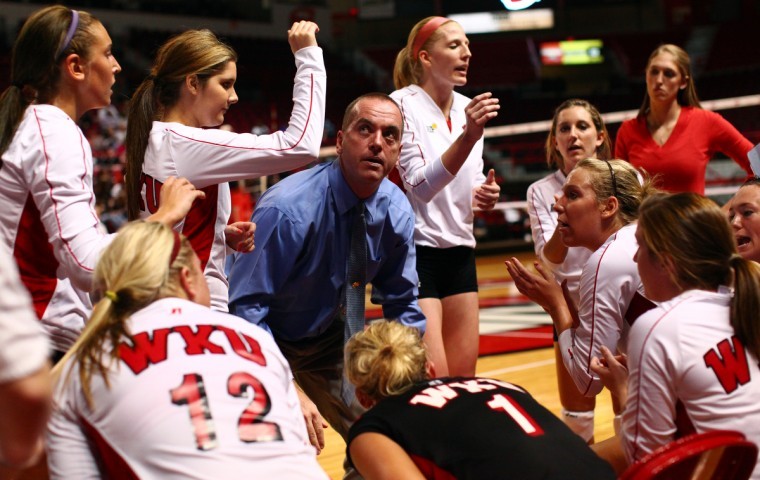 WKU volleyball coach Travis Hudson only has five upperclassmen on his roster, but he said this year's team is anything but inexperienced.

Follow along with Herald beat writer Emily Patton as the WKU volleyball team hosts Middle Tennessee at 7 p.m. Friday in Diddle Arena. The winner of tonight’s game takes the Sun Belt’s regular-season title and No. 1 seed in the conference tournament.

WKU falls to the Blue Raiders 0-3 in Diddle Arena on senior night.

The Lady Toppers still refusing to go quietly. A kill by senior outside hitter Emily Teegarden puts WKU down by one, 14-15.

A kill by junior Tiffany Elmore gives WKU its largest lead of the game, 2-1.

Out of the ordinary for the Lady Toppers, they begin the third set with a 1-0 lead over MTSU because of a bad set.

Three straight digs by sophomore Jordyn Skinner, followed by a kill by Williams pull the Lady Tops with one. But MTSU prevails after a WKU attack error.

The Lady Toppers make a statement in the crowd by taking a one point lead, their first lead of the match.

WKU is struggling to get a lead. The Lady Toppers remain tied or down by one against MTSU. Score 8-9 Blue Raiders lead.

Unclear out of bounds call on a ball has Head Coach Travis Hudson off the bench, but a WKU service ace by Sarah Rogers ties the game at 5-5.

Result of Game one:

Earlier the Lady Toppers were trading points with the MTSU. A kill by senior outside hitter Emily Teegarden ties the match at 5-5.

Pregame: WKU (25-6, 14-1 Sun Belt Conference) is about 10 minutes away from the start of the Middle Tennessee Blue Raiders volleyball match in Diddle Arena.

The Lady Toppers are back for a rematch at home to possibly claim their eighth East Division title and the honor of regular season Sun Belt champions.

In the most recent NCAA women’s volleyball RPI rankings, the two teams are separated by just four spots. WKU is ranked No. 36 and MTSU sits at No. 40.

Because of the high rankings, the winner could receive an at-large bid to the NCAA tournament.

Prior to the match, seniors Emily Teegarden and Kelly Potts will be honored.