Pettigrew a ‘reflection’ of what coaches want from other players 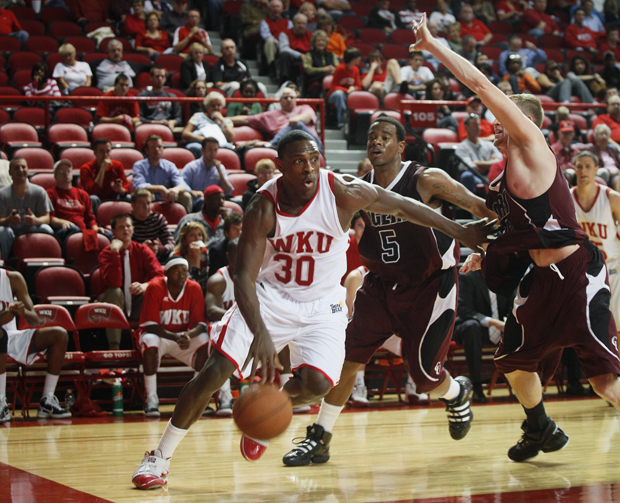 WKU senior forward Steffphon Pettigrew drives the ball towards the basket in the second half of WKU's season opening exhibition game against Campbellsville. Pettigrew scored a team-high 23 points to lead WKU in an 80-57 win.

It’s easy for senior forward Steffphon Pettigrew to count the number of bad practices he’s had in more than three years at WKU.

“I don’t think I’ve ever had a bad practice,” Pettigrew said. “That’s me personally, but I try to go hard every possession in practice. I try not to take any plays off.”

Pettigrew’s career averages of 10.5 points and 4.6 rebounds per game have been modest but certainly consistent.

The former Kentucky Mr. Basketball scored in double figures in 29 of 34 games last year, which McDonald said is a tribute to Pettigrew’s workman-like nature.

“He is such a reflection of what we want our program to portray,” he said. “He’s just a professional kid.”

Pettigrew is the last recruit on WKU’s roster recruited by former Head Coach Darrin Horn. He was used primarily in the post as a freshman during Horn’s final year, shooting just eight three-pointers in 411 minutes.

In the two seasons since McDonald arrived, Pettigrew has started 65 of 68 games and taken 216 shots from behind the arc. He’s made 80 of them — a 37-percent clip.

“With coach Horn, it was more working inside all the time and not working on my perimeter game at all,” Pettigrew said. “But coach Mac … tried to work on the small things in my game and make me a better leader.”

Being a more vocal leader is the one area in which McDonald said he can still criticize Pettigrew. But as expected, McDonald said Pettigrew is working on that as well.

“It’s not in his personality, but he’s definitely been more vocal than he has in the past,” McDonald said. “If he speaks up, people will listen. People just listen to him because he has to be right.”

“The way I play, I like to go out there like it’s my last game,” Pettigrew said. “I try to have that hunger to win each and every day in practice and each game. I try to play hard every possession, so I don’t have any doubts.”

“Steffphon is crazy,” Kerusch said. “He’ll come in at six in the morning, and he’ll be doing layup dunks while everybody else is on the sideline. He’s like, ‘Give me the ball, give me the ball,’ and run up and dunk it.

“It’s like, ‘Why are you so happy at six in the morning on a Monday?'”

If there’s one thing that Pettigrew said he doesn’t want to be his legacy, it’s that he reached the tournament his first two seasons and couldn’t deliver as an upperclassman.

He said he’s working every day to “go out with a bang” in the NCAA tournament, and McDonald said that drive is what earns Pettigrew an ovation every time he comes off the court.