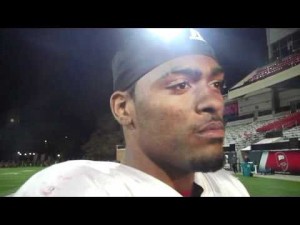 After one of the most demoralizing losses of the season for WKU, Head Coach Willie Taggart said the Toppers had their “best Tuesday practice” of the year tonight.

Taggart said the team was back making plays with energy, as the coaching staff stressed since the loss to North Texas last Saturday that football is meant to be fun.

“I thought we got away from that a little bit last week,” Taggart said. “We’ve got to create that juice and that energy. We talked about enjoying these next four weeks with the seniors and having some fun in practice, because you won’t get to play with them again.”

— In other news, the battle for the starting kicker job continued at practice Tuesday between freshman Monte Merrick and junior Casey Tinius.

Tinius had been the team’s definitive starter, but he was pulled after missing a 41-yarder in the North Texas game that dropped him to 4-of-10 on the year. Merrick made both of his attempts later as the replacement.

“It’s wide-open. It’s like that every week,” Taggart said of the position. “Right now, Monte’s in the driver seat, but it’s the same thing — whoever has the best week of practice will kick for us.”

Merrick and Tinius did their best to one-up each other at the end of practice, as each got one shot at a field goal from an increasingly longer distance. As is routine at each practice, the rest of the players gathered around the kickers and yelled.

The final attempt was from close to 50 yards. Merrick put his directly through the uprights, while Tinius’ hooked wide left.

Taggart said Bullard sustained an injury against North Texas and won’t play this weekend against Florida Atlantic if he can’t practice Wednesday. Taggart said Smith’s injury was less serious, and the sling was a precaution.