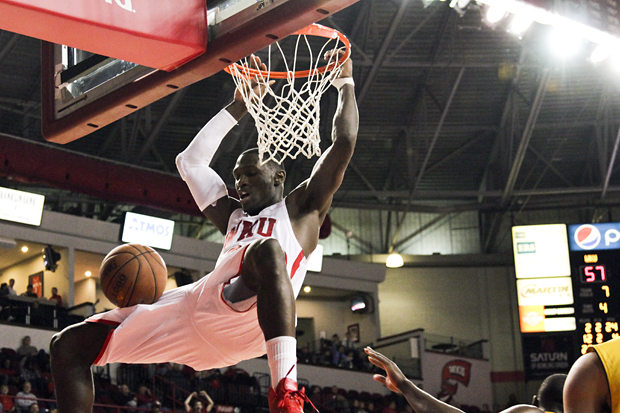 Senior forward Juan Pattillo dunks in the second half to put the Toppers up 59-42 against Xavier (La.). Pattillo scored 31 points and had nine rebounds in an 84-69 WKU win.

It didn’t take Juan Pattillo long to shake off the rust.

The game — the Toppers’ final exhibition — was just Pattillo’s second game since transferring from Oklahoma in 2009. He had 17 points and 10 rebounds in WKU’s win over Campbellsville Sunday.

“Like I said last game, I haven’t played in a couple of years, so it’s normal to be nervous,” Pattillo said. “After I got that out of the way, I felt pretty comfortable and ready to get back at it again.”

Pattillo led the way for a WKU team that flexed its defensive muscle, forcing Xavier into 26 turnovers and scoring 42 points off of those miscues.

“We took a jump from last game to this game, and you could tell from our intensity and our ball pressure,” Pattillo said. “We were in the passing lanes getting steals and turnovers and taking charges, so we’re getting there.”

The Toppers got off to a much better start against Xavier than they did against Campbellsville, jumping out to a 14-2 lead after two free throws by Pattillo at the 15:07 mark of the first half.

McDonald said after the game that the Toppers had 20 deflections, a statistic not kept in the box score, at the break. They had 12 at halftime against Campbellsville, he said.

“We really wanted to try to get after it a little more on the ball, in the passing lanes, creating some offense with our defense,” McDonald said. “There’s no question tonight there was a lot of that.”

WKU outscored the Gold Rush 19-5 over the first seven minutes of the second half, taking its biggest lead of the game at 53-30 with 13:41 to play.

Xavier pulled back within 12 with a quick 11-0 run, but Pattillo shut the door in a hurry.

In a span of less than two minutes, Pattillo scored nine points, including three dunks. His final basket during the spurt was a putback and foul, which gave WKU a comfortable 20-point lead with 8:53 remaining.

“If I jumped that high, I’d never be nervous about anything,” McDonald said. “I think he had higher expectations for himself in the second game than he did in the first. He’s so scary looking on the defensive end when he gets down in a stance and he’s ready to play, and he just makes things happen.

“He has an incredible ability to change the game with his defense and create offense for us.”

“Coach Mac always tells me what I need to do and what he expects out of me, and before the game he told me I needed to pick up the defensive pressure,” Peters said. “So that’s what I did.”

WKU shot 44.8 percent from the field in the game but made just 3-of-16 3-point attempts. The Toppers were also outrebounded by the Gold Rush, 39-33.

Xavier had just one scorer in double figures — Devin Andrew, who totaled 10 points and seven rebounds.