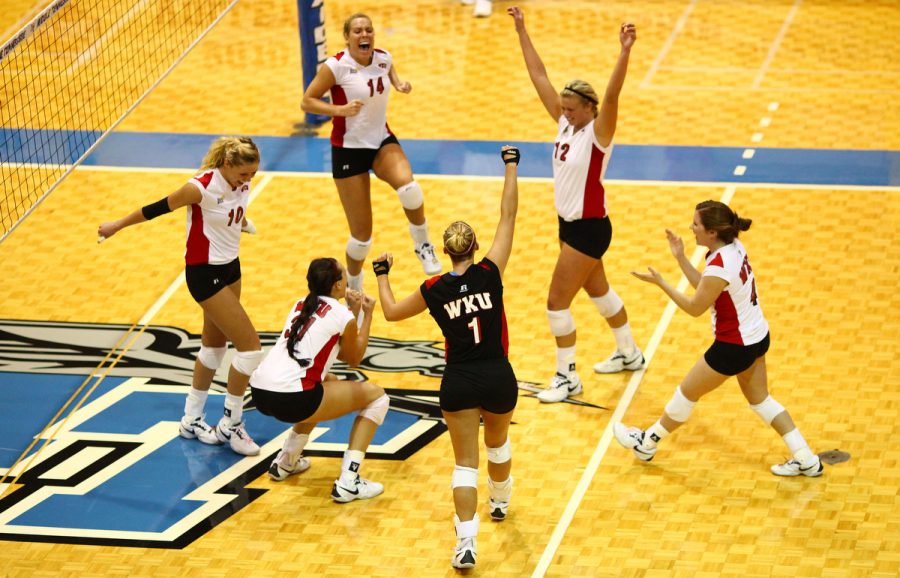 The Lady Toppers shut out Florida International 3-0 during the semi-final round of the 2010 Sun Belt Conference Volleyball Championship in Murfreesboro, Tenn. Friday evening, November 19, 2010.

WKU will now meet the first place seed Middle Tennessee for the title and an automatic berth to the NCAA tournament on Saturday.

“Oh I can’t wait,” Williams said. “It is very exciting for us to get to this point. We have been preparing for this all season. Our dreams and our goals are actually coming true.”

The junior from St. Charles, Ill. led WKU with 11 kills and a .264 hitting percentage, allowing the Lady Toppers to take an early 10-3 over FIU in game one.

When the Panthers (20-11, 12-4 Sun Belt) began their comeback to pull within three at 22-17, a Williams kill passed by freshman setter Melanie Stutsman gave WKU the boost to win.

“I looked to my teammates for support and I gave my support and we both were there for each other,” Stutsman said.

The second game featured 13 ties and four lead changes, but Hudson said Williams and teammates held their composure to come out with the win just like against Louisiana-Lafayette on Thursday.

In the third game, the Lady Toppers took a 12-11 lead and didn’t trail again for the remainder of the match.

Hudson said the lack of Panthers’ offense was “absolutely the difference in the match.”

FIU’s record was broken with help from the Panthers’ sophomore outsider hitter Jovana Bejelica, who did not play in either of the last two meetings between WKU and FIU.

Williams said she knew to watch for Bejelica

“We came out knowing she would get her kills, but that was she also going to get her errors,” Williams said. “We wanted to be aware of both those things and not be too scared for her, but be prepared for her.”

Bejelica finished the match with 11 kills and a .233 hitting percentage.

WKU advances to the championship match at the SBC tournament for the seventh time in the last nine seasons, including three of the last four.

“It is not an easy thing to do to get there,” Hudson said. “One thing I do know is you can’t possibly win it if you’re not in it. You want to get yourself there as many times as you can.”

The Lady Toppers will enter the finals on Saturday at 7:30 p.m. after playing what Hudson said was their “best performance of the year.”

WKU’s only two conference losses have come from the Blue Raiders, after being swept in Murfreesboro on Oct. 5 and again at home on Oct. 12.

But Hudson said he remains positive that the third time could be the charm after the performance he saw tonight.

“I am so proud of them,” Hudson said. “It’s everything from getting through the bus incident back a month ago to taking that very disappointing loss on Friday night to end the regular season and bouncing back and playing like they’ve done here.”