Freshman Peters off to fast start for WKU 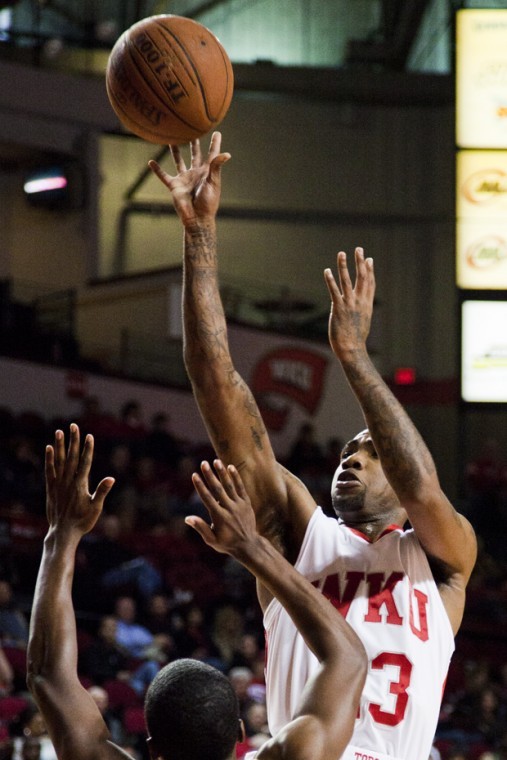 Freshman guard Brandon Peters rises above Xavier (La.) junior guard Jamaan Kenner as he attempts to score during the first half of their game at Diddle Arena on Thursday, Nov. 4. The Toppers won 84-69.

The only way Brandon Peters knows to play defense is at a feverish pace.

Aggression on the court was instilled in WKU’s freshman guard in high school, a level where defense is sometimes scarce.

But not at Yates High School in Houston, where Peters completed his high school career on a 58-game winning streak.

Yates, which finished last season ranked No. 1 in the country by USA Today, scored more than 100 points per game 15 straight times and infamously pounded a neighboring school, 170-35.

But despite all that offense, Peters said the team’s focus started at the other end.

“Our whole practice was defense,” he said. “By playing defense, you work on your offense. It’s pretty much the same here, only more intense.”

Head Coach Ken McDonald said the reputation of Yates’ defense is a rare thing for a high school to have. And by coming through that system, McDonald said Peters is a special type of freshman.

“You don’t catch a lot of high school players that come in with that mentality, so that’s a start,” McDonald said.

Peters’ head start has been crucial early, especially since McDonald has already labeled WKU a “defensive team” this season.

Peters was not only a factor in the Toppers’ two exhibition games. He also started both.

He made his biggest mark in WKU’s 84-69 win over Xavier (La.) on Nov. 4, recording seven points, eight assists and seven steals in 28 minutes. He grabbed the first four of those steals in the first four minutes of the game.

“Coach Mac always tells me what I need to do and what he expects out of me, and before the game he told me I needed to pick up the defensive pressure,” Peters said. “So that’s what I did.”

McDonald said he’s been most impressed by how receptive Peters is to advice, always asking how he can improve when coming out of the game.

“His willingness to compete and defend for a freshman is something to watch,” he said. “I’m excited about the possibilities for him.”

Peters’ teammates are excited about the possibilities, too. Of his eight assists against Xavier, five of them went to senior forward Juan Pattillo.

“The kid has potential — no question,” Pattillo said. “He was all over the place in the passing lanes, getting steals. He made it easy for me. He was getting steals and dumping it off to me, I’m finishing. It’s looking good for the young kid.”

If a criticism could be made about Peters at this point, it would likely be his outside shooting. He’s missed all five of his 3-point attempts through two games, but McDonald said he has no doubt that Peters can score.

He averaged 25.5 points per game as a senior at Yates, and McDonald said Peters has often put on a shooting clinic in practice.

It’s been a fast start for the guard fans affectionately call “Snap,” a nickname he said he’s had since childhood.

But with WKU opening its regular season tonight at St. Joseph’s, Peters said he’s got plenty of work left to do.

Because if there’s one thing he learned at Yates, it’s how to not take his foot off the gas pedal.

“I still haven’t played my best,” he said. “It’ll be a lot more than what I just gave.”