Brown looks to make most of unexpected season 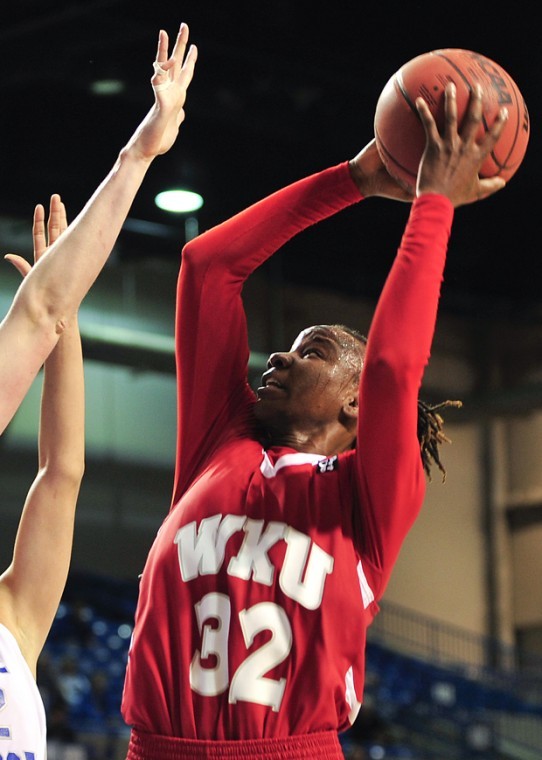 Senior forward Arnika Brown goes in for a layup at the Sun Belt Conference Championship in Hot Springs, Ark., on March 8.

Arnika Brown thought that with the end of last season came the end of her collegiate basketball career.

Brown was recognized on Senior Night and talked as if she’d played her last game.

That’s because when Brown transferred from the University of Kentucky before playing a minute as a freshman, she wasn’t granted a transfer release and lost a year of eligibility.

It wasn’t until after last season — three years after Brown’s transfer — that Kentucky finally released her from the letter of intent she signed out of high school.

But even then, Brown had a choice to make: end her career, or return for one final season.

Since the news came unexpectedly, Brown said she took an entire weekend to make her decision — one that didn’t come easy.

“A million things went through my mind,” she said. “I texted coach (Mary Taylor Cowles) left and right that whole weekend, and we talked a lot, and I just rode with it.

“I said, ‘OK, I’m going to do what I want to do,’ and I quit listening to everyone and did what was best for Arnika.”

When Brown decided to come back for her final year, Cowles said she couldn’t have been more proud of how Brown handled the decision.

“It speaks of Arnika’s maturity in knowing that she could benefit individually at this level, being able to work on different aspects of her game,” Cowles said. “It’s a win-win situation for her as a player and obviously for our basketball team as a whole.”

At 23 years old, Brown said age became a big factor in whether she would return. But she said despite the fact that she’ll turn 24 in February, she figured one more year wouldn’t hurt her.

In fact, the age issue has become something fun for Brown and the other players to joke about.

“My teammates think it’s funny that I’m going to be 24 in February and still a college athlete,” she said. “Vanessa (Obafemi) said I set records in everything else, and now I get to set a record as the oldest Lady Topper.”

Senior point guard Amy McNear joked that despite the fact that Brown is the oldest player by more than a year, she’s still the “baby” of the team.

After hearing that, Brown didn’t try to defend herself.

“Jasmine (Johnson) and LaTeira (Owens) are probably the parents of the team,” she said. “I’m definitely the baby.”

That babyish mindset doesn’t show up for Brown on the court, though.

Brown has also accumulated more than 1,000 points in her career and holds the WKU record of 25 rebounds in a game.

Those were the reasons that Cowles said she was excited to have Brown back for one more season.

“It just adds a dimension to our team that we really thought we were going to be losing,” Cowles said.

In her final season, Brown said she wants to set even more records and has already set a goal to get 30 rebounds in a game.

First, Brown will have to get past some early setbacks. A hamstring injury kept her out of Hilltopper Hysteria, and a stomach virus sidelined her for the Lady Toppers’ first exhibition game on Tuesday.

But Brown is scheduled to play in Sunday’s exhibition against Lee (Tenn.) and said she’s simply “excited to be back playing.”