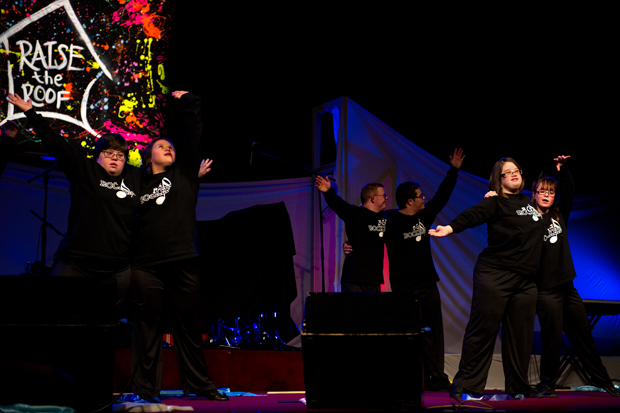 Participants from the BG Rockerz put on a performance as part of the Raise the Roof fundraiser at Hillview Heights Church tonight. All of the proceeds from the event will benefit the Down Syndrome Buddy House.

An hour and a half before attendees made their way into the auditorium for the concert, Beyonce’s “Single Ladies (Put A Ring On It)” blared from the speakers and three female members of the Down Syndrome Dance Troupe, the BG Rockerz, moved to the front and started to reenact signature moves from the song in preparation for the night.

After they finished practicing their playlist, which also included MC Hammer’s “U Can’t Touch This” and Michael Jackson’s “Beat It,” Megan Ries, one of their coaches, jumped up in the air.

The group is one of the four acts to perform tonight at the “Raise the Roof” benefit concert.

Money raised at the concert will be put towards building the Down Syndrome of South Central Kentucky’s Buddy House.

The Buddy House, once built, will provide people with Down Syndrome with support such as a place for meetings and classes for parents with Down Syndrome children about early childhood development, said Jane Tichenor, who serves on South Central Kentucky’s Board of Directors and whose daughter, Kate, is a member of the dance troupe.

The Rockerz has 13 members ranging from ages 10 to 50 years old, said Ries said they have also performed at the annual Buddy Walk, which was in September, at Bowling Green Hot Rods games and at The Medical Center’s Wellness Fair.

This is the third year for the benefit, she said.

Ries, a senior from Cincinnati and a WKU Topperette, said she has been the co-coach of the BG Rockerz since last June.

“My roommate used to coach special cheerleaders and knew a couple of the (BG Rockerz) girls and when the old coach moved away and there was an opening, she knew this would be something I would enjoy,” she said.

Ries said her for love has created an intense bond with the group.

Mackenzie Cable, a sophomore from Lebanon, Tenn. and a former WKU Topperette, is the other coach for the BG Rockerz.

She said that coaching the Rockerz has kept her spirits up since she quit the Topperettes due to a knee injury earlier this year.

“My major is exceptional education and I hope to be a dance coach someday so this is perfect,” Cable said.

Dunn, who is a member of Hillvue Heights Church, said he decided to perform at the benefit to help raise awareness of Down Syndrome.

“Anytime we can do benefits like this, we do it because for one it’s really fun and two because it’s meaningful,” he said.

About 300 people attended the event tonight, which is more than the turn out last year, said Tammy Essler, wife of president of the Down Syndrome Support Group of South Central Kentucky, Scott Essler.

She said they raised about $1,500 for the Buddy House.

Lee Dockens, a member of the Rockerz, said she dances because it’s become something familiar to her.

Heather Tecker, another member of the group, said she likes to perform because it comes easy to her.

Cable said her group, members and coaches alike, have grown closer together through their love of performing.

“They put their heart into it,” she said. “You see people dancing and they’re just going through the motions, but with them they give it everything they got.”