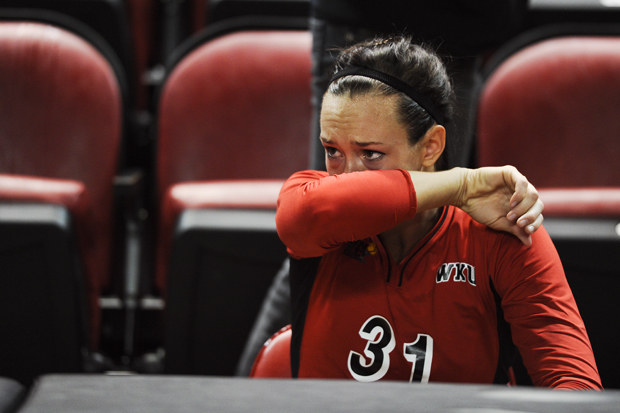 Head Coach Travis Hudson said he could feel the disappointment in Diddle Arena.

MTSU also earns the top seed for the SBC tournament on Nov. 18, while the Lady Toppers secure the second seed.

WKU’s only conference losses on the season are to Middle Tennessee.

In a match that featured 31 tie scores and 11 lead changes, WKU struggled to earn more than a two-point lead, which happened just once during the third game.

It was not until the second game that the Lady Toppers managed their second lead of the match with a block by senior outside hitter Emily Teegarden and junior middle hitter Tiffany Elmore.

“Every game was back and forth back and forth to a certain point, then we would have a break down and that was enough because of how well (MTSU) were playing,” Hudson said.

Hudson also attributed the close games to the limited Middle Tennessee errors and the amount of attack errors that haunted WKU.

MTSU had only seven errors in the entire match, which was less than or equal to any amount the Lady Toppers had in a single game.

“Seven hitting errors in the match and that’s unheard of in college volleyball. Unheard of,” Hudson said. “We could not find a way to get them out of what they wanted to do offensively.”

For senior defensive specialist Kelly Potts, she said looking at the amount of errors gave her hope for the next possible meeting with the Blue Raiders.

“That’s something all on us,” Potts said. “It is not anything they did to us specifically. The good news is that we can change that.”

Along with Potts, her classmate Teegarden said there is a glimmer of hope that remains even in defeat.

WKU was held to a .163 hitting percentage and committed 23 attack errors in front of a season-best crowd of 1,074 people. WKU was led by sophomore outside hitter Jordyn Skinner’s nine kills. Three other Lady Toppers contributed eight kills each.

“I can’t say enough about the atmosphere in Diddle tonight,” Hudson said. “16 years ago when I started here, I don’t think anybody in their wildest, wildest dreams would have ever thought that Diddle Arena would hold a volleyball crowd like that.”

The fan turnout was something that Hudson said he will use to help motivate the two seniors moving forward in tournament play after the loss on Senior Night.

“You never want to leave Senior Night with a loss,” he said. “The positive you have to take from this is the atmosphere that they have helped build in their careers here at Western, that this many people care about WKU volleyball and they leave a legacy in that regard.”

Next for the Lady Toppers is the Sun Belt tournament, which begins Wednesday at 5 p.m. in Murfreesboro, Tenn., against the No. 7 seed, who has yet to be determined.