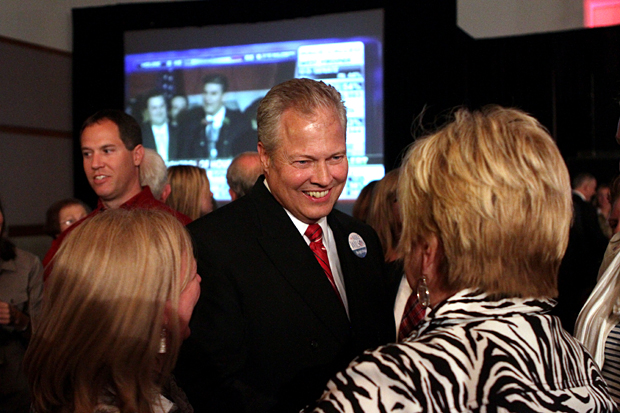 Mike Wilson talks with Rand Paul supporters at during Paul's election party at the Sloan Convention Center in Bowling Green.

Wilson’s campaign manager, WKU grad Shane Noem, said both he and Wilson were excited by the win.

Results weren’t immediately available at the Ky. State Board of Elections, but the Bowling Green Daily News reported that Wilson leads Reynolds 54 percent to 46 percent (18,347 to 15,144) with all but one precinct reporting.

Susan Woodard, a disc jockey at Christian Family Radio, was there and said she was an avid Wilson supporter.

“I think that God is really calling him to serve,” she said. “He is following God’s plans.”

Woodard said she was drawn to Wilson because he was a “regular person” and not a politician by trade.

“He is just honest,” she said.

Mike Reynolds and supporters had gathered at his home on Smallhouse Road to watch the results.

“I’m not hurt. Nobody died. Nobody got hurt,” Reynolds said. “A lot of people worked hard.”

Reynolds, who won the Senate seat in a special election in 2009, has two months left in his current term. He said he’d be assessing what his political future will be over the holidays.

“This is a part time job, part time position,” he said.

Reynolds is also a partner at the law firm Reynolds, Johnston, Hinton & Pepper, LLP on 310 E. 11th St., which he considers his full-time job.

Supporters, volunteers, family and friends weren’t as mellow after the results were concluded.

“It’s tough,” he said. “I’ve been working all year on this and people pulling an all Republican ticket didn’t help.”

Reynolds’ son, Chris Reynolds, and campaign treasurer, Kim Kirby, said many people are fed up with what is going on in D.C. and the anti-Obama trend.

“It doesn’t matter who the candidate is, that was the result tonight,” Chris Reynolds said.

Reynolds said he called Wilson to congratulate him but reached his campaign manager.