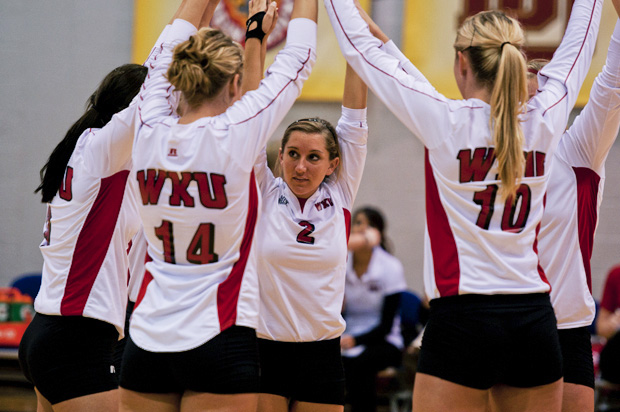 Follow along with the Herald's coverage of WKU's second-round Sun Belt tournament matchup with Florida International. Beat writer Emily Patton is in Murfreesboro for the match, which begins at 5 p.m. CT.

Follow along with the Herald’s coverage of WKU’s second-round Sun Belt tournament matchup with Florida International. Beat writer Emily Patton is in Murfreesboro for the match, which begins at 5 p.m. CT.

WKU defeats FIU 3-0 to move onto the championship match against either MTSU or North Texas on Saturday.

Williams gets yet another kill, WKU opens up to 22-17 on FIU.

WKU now on largest lead of this game at four points over FIU.

The Lady Toppers now lead 15-12 over FIU in the third game in Murfreesboro, Tenn. Timeout on floor by FIU.

A net violation by WKU ties game at 11 all.

Teegarden on a roll now with another kill to give Lady Tops a 9-8 lead over FIU. Skinner follows with a block as WKU goes up 10-8 now.

Teegarden and Skinner are both tied at seven kills for WKU.

A second kill by the senior gives WKU the lead, 7-6 over FIU.

Senior Emily Teegarden ties the score at 6 all with a kill.

WKU pulls within one now with a kill by junior Lindsay Williams, score 6-5 FIU.

A kill by Melanie Stutsman brings Lady Tops to two behind FIU.

Lady Toppers down by three early with a kill by Jovana Bjelica. Score 4-1 FIU. Bjelica has now earned 10 kills and a .304 hitting percentage for FIU.

WKU seems to have relaxed too much while FIU is still firing. Panthers take 2-1 lead.

A kill by junior Tiffany Elmore gives WKU the second game, winning 25-23 over FIU in Murfreesboro, Tenn. The Lady Toppers lead 2-0 in the match.

Timeout by FIU after a kill by Paige Wessel increasing the WKU to 22-20 over FIU.

Panthers pull within one after attack error on WKU. Score 20-19 WKU.

Now a three-point lead by WKU with a kill by Melanie Stutsman, 20-17.

WKU takes a two-point lead over the Panthers after an attack error. Score is now 19-17.

WKU takes first lead since beginning of the match with a kill by Lindsay Williams.

The Panthers will not go quietly in this game with another tie score at 13-13.

A service ace by Sarah Rogers ties game at 11 all against FIU.

The Lady Toppers down by two after a kill by Jovana Bejelica, six for her now.

Tie game at 7 all with a kill by Jordyn Skinner.

A kill by junior Lindsay Williams pulls WKU within one of FIU; score now 6-5 FIU.

FIU Jovana Bejelica is showing the form that WKU Head Coach Travis Hudson and players said they worried about. She now has five kills and ties the game at 3-3.

Junior Tiffany Elmore opens up the second game with a kill for WKU to take a 1-0 lead over FIU.

Attack error on FIU gives the Lady Toppers the first game, winning 25-19 in Murfreesboro, Tenn. in the second round of the SBC tournament.

Matchpoint for WKU now at 24-19 after a block by Elmore and Skinner.

FIU Timeout on floor. Kill by Melanie Stutsman put WKU on top 21-14 over the Panthers.

Errors by FIU, both service and attack, lengthen WKU lead to 20-14.

The Panthers are making a comeback now, pulled within four.

FIU outside hitter Jovana Bjelicia, who led the FIU with 17 kills against Denver yesterday, has been held to zero kills at this point in the match.

Service error by WKU pulls the Panthers to 13-7.

Error by FIU earns the Lady Toppers another point; score is 10-3 WKU.

Sun Belt’s Freshman of the Year Melanie Stutsman gets a kill for WKU. Time out on floor. Score is now 9-3 WKU leads.

Junior Tiffany Elmore gets a kill along with junior Lindsay Williams to start WKU off with a 2-0 lead.

The No. 2 seed WKU defeated Louisiana Lafayette on Thursday to advance to play No. 3 seed, the FIU Panthers.

WKU has claimed wins the last two times these teams have met.

The winner of this match will face either Middle Tennessee or North Texas, which will be determined following this match.