Sorority recruitment to change in 2011 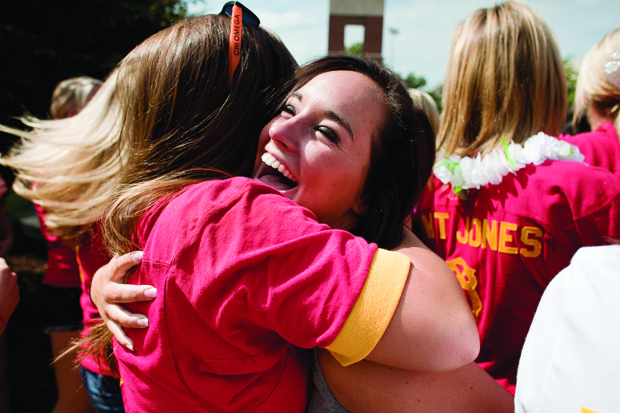 Louisville freshman Katie Engel accepts her bid into Chi Omega in August with a hug from her new sorority sister. “I was really happy and excited, “ Engel said. “I didn’t know who she was, I just ran up and hugged her.” The sorority recruitment process will change for fall 2011.

Editor’s note: A previous version of this story stated that a third round would be added to sorority recruitment in the fall. There will actually be four rounds next year. The story has been corrected, and the Herald regrets the error.

Recently, WKU has had issues with women withdrawing during the early stages of sorority recruitment because of poor grades, said Gary Wiser, coordinator of Student Activities.

To avoid these issues in future years, a fourth round will be added to sorority recruitment next fall, Wiser said.

Wiser said there’s a grade standard in sororities, which is usually a 3.0 grade point average out of high school.

But students only need a 2.5 GPA to actually go through Greek recruitment, Wiser said.

The first round of recruitment, which is spread out over two days, allows women to visit each of the seven social sororities on campus, Wiser said. During the second round, the women may revisit up to five of their favorite sororities.

“Some women only go to two or three, though,” Wiser said. “This is because of the grade requirement. Also, if women don’t have a 3.0, rather than staying in and looking at the options they still have, they would rather withdraw from recruitment.”

Adding another round will let the women better get to know sororities that they might not have considered after the first round and that might have a lower grade requirement, Wiser said.

“It’s been hard on these girls,” Wiser said. “It’s not that they’re bad people or the sororities don’t like them – they just have to meet a certain grade requirement to get in.”

The new round was decided on a vote by all of the chapters, said Lauren Gray, WKU Panhellenic recruitment chair.

Gray, a senior from Franklin, Tenn., said there were four different options sororities could choose from, with one option being to keep recruitment the same.

“We put the vote out to all of the chapters, so it would be solely what they wanted,” she said.

The way the new round will work hasn’t been decided on yet, Wiser said.

Nashville senior Mandy Lowry, who’s also WKU Panhellenic president, said the new round is also being implemented in anticipation of a new sorority coming to campus.

Lowry said that although the new sorority, which hasn’t been decided yet, may not join for another year or two, it’s best the rounds change now, because they would have to eventually.

“Our thinking was to go ahead and put our foot in the door with the new changes, so when a new group did come on campus there wouldn’t be such a shock,” Lowry said.

As WKU’s freshman classes are steadily growing, Lowry said there has been the need to accommodate more recruits, and the additional round will do this.

Wiser said there has been heavy student interest in Greek membership in the last few years because of the growing student population.

“Even with the withdrawals in our sorority recruitment, our Greek membership is as high as it’s ever been,” Wiser said. “This year we reached 1,600 members for the first time.”