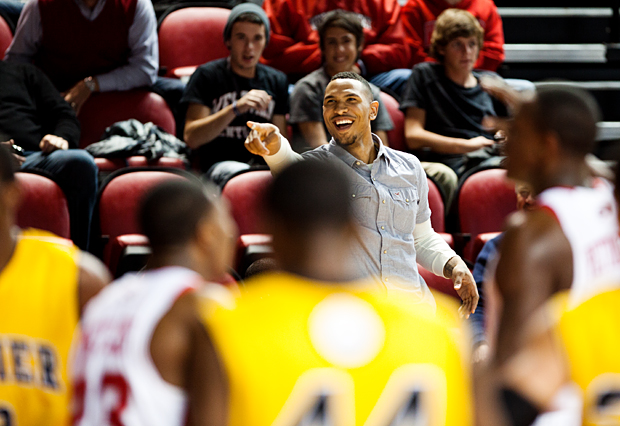 Senior forward Sergio Kerusch gestures to his teammates from the bench during the second half of their game against Xavier (La.) at Diddle Arena on Thursday night. The Toppers won the game 84-69. Kerusch sat out during the exhibition match with a sore foot.

Although senior forward Sergio Kerusch didn’t start against Campbellsville Sunday, he wasn’t available to the Toppers at all Thursday night.

McDonald said Kerusch injured the foot diving for a ball during the Campbellsville game.

“It swelled up a lot the other day, so it’s given him a chance to kind of sit back and watch practice,” McDonald said. “But the swelling did go down a day in.”

The injured foot is Kerusch’s left, which McDonald said was a big relief to him. Kerusch missed 14 games last season with a broken right foot.

McDonald said Kerusch should return to full practice within the next couple of days.

“We’re just being very precautionary and making sure that he’s fine,” McDonald said. “But we expect him back at practice within a day or two to start getting ready for St. Joe’s.”

With Kerusch on the bench, freshman guard Brandon Peters got his second chance to enter the starting lineup.

He responded by filling up the stat sheet, finishing with seven points, eight assists and seven rebounds.

“He had an outstanding game,” McDonald said. “His willingness to compete and defend for a freshman is something to watch. I’m excited about the possibilities for him, and I was very happy with his effort.”

Peters said he became defensive-minded during his time at Yates High School in Houston, but there’s still been a learning curve during WKU’s first two games.

“All it did was just roll over,” he said. “We did that in high school, but it’s just a different level. People are more aggressive, so you’ve got to get more aggressive with what you’re doing.”

Peters’ strong start has also earned him the respect of his teammates, including senior forward Juan Pattillo.

Of Peters’ eight assists, five of them were looks to Pattillo.

“The kid has potential, no question,” Pattillo said. “He was all over the place in the passing lanes, getting steals. He made it easy for me. He was getting steals and dumping it off to me, I’m finishing. It’s looking good for the young kid.”

Despite getting two decisive exhibition wins, McDonald said he’s still seen some things early on that concern him.

One of the biggest worries is rebounding. Xavier beat WKU 39-33 on the boards, and the Toppers were outrebounded by one by Campbellsville in the first half Sunday.

McDonald said several players have a habit of relying on pure athleticism to rebound, which is a habit they need to break.

“We’re not a good block-out team right now, and that’s something we’re going to have to really change in a hurry,” McDonald said. “That can come back and bite you.”

Part of that was because Peters was finding Pattillo and others so frequently, but McDonald said Crook and Brown need to be more proactive on offense.

“I want to get the ball moving,” he said. “We had a tendency to stand around last year and over-dribble, and that’s still an issue we’re trying to get out of our system. Ball movement’s more of a key right now than those guys making a play at the end of the clock.”