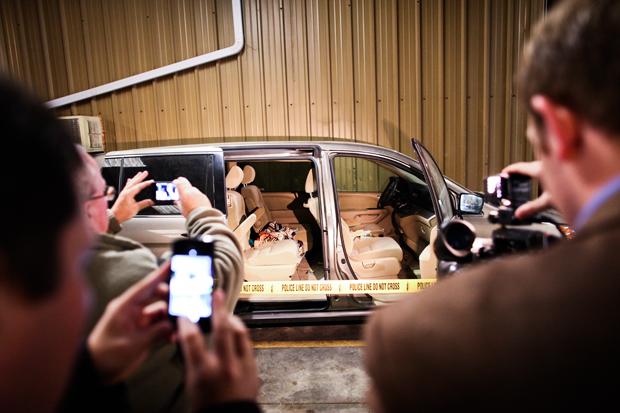 Members of the news media record video of the van in which murdered WKU Math Professor Bettina Richmond was found dead with multiple stab wounds, Sunday November 22, 2009 in Circus Square Park downtown. Bowling Green Police opened up the van, which is still considered a crime scene, to the media in a secure warehouse at the Bowling Green Police Fleet Division on Veteran's Memorial Lane. Luke Sharrett/Herald

Nearly a year after the murder of 51-year-old math professor Martha “Bettina” Richmond, police continue to investigate the case.

Barry Pruitt, public information officer for the Bowling Green Police Department, gave an update on the Richmond case to media on Thursday morning.

Monday is the one-year anniversary of Richmond’s death.

“This is a continued investigation,” Pruitt said. “We’re working on it on a daily basis.”

Police found Richmond dead in her vehicle, which was parked in the Bowling Green Parks and Recreation parking lot just before 11:30 p.m. on Nov. 22, 2009.

According to autopsy reports, Richmond died of multiple stab wounds.

Yesterday, members of the local media were invited to observe and take photographs of the van in which Richmond’s body was found.

The van, a tan-colored Honda Odyssey, was intact and left in the same condition it was found in the night of the murder.

The van contained a blanket and scattered papers in both the front and back seats, and blood was visible on the driver’s seat.

Pruitt said there was no sign of forced entry into the vehicle.

Police submitted 21 items from the van this week as pieces of evidence for the case, he said.

The van itself has been submitted three times as evidence for the investigation, Pruitt said.

Pruitt said until a suspect is found, the connection between Richmond and her murderer remains unclear.

Richmond had in her possession a large shoulder bag that has been missing since the night of the murder, Pruitt said.

Richmond’s WKU ID card was later found in a mailbox on Crewdson Drive.

Hahn, a friend of Richmond’s family, said he talked with them about making the page.

The original reward for information on Richmond’s murder was $10,000, but the amount was doubled to $20,000 this week, he said.

Hahn said there should be a public announcement about the increase in reward money soon.

Landscape Architect Helen Siewers is a member of the committee that helps manage the reward money.

The committee worked with Media Relations Director Bob Skipper to help spread the word about the reward.

“We’re very hopeful that info will come,” Siewers said. “We hope the reward will be motivation.”