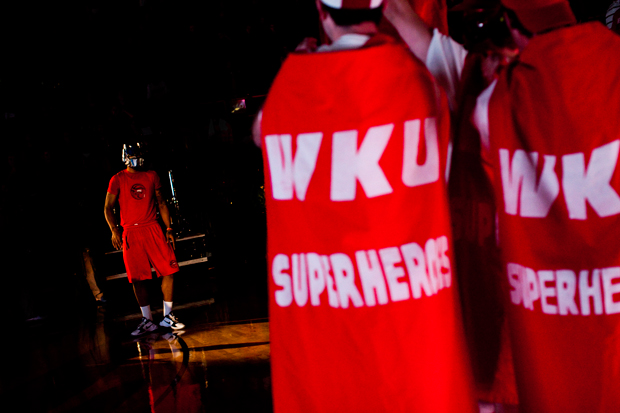 But the Toppers made sure the 3,700 fans in Diddle Arena got their fair share of rim-rattling jams earlier on.

WKU’s red team, playing without a regular starter from last season, upset a white squad filled with the starting Toppers in an intrasquad scrimmage, 41-37.

But what really got the crowd going was the seemingly never-ending rash of dunks from both teams, an offensive display that Head Coach Ken McDonald poked fun at after the event.

“The defense was outstanding,” McDonald said with a big grin. “After a while, I turned around to my assistant, Lawrence Brenneman, and said, ‘Well, we know we can dunk.'”

Senior forward Sergio Kerusch, who also won the dunk contest later in the night, led both teams in scoring along with junior guard Kahlil McDonald. Both had 14 points.

Kerusch scored most of those points off dunks, but urged the Diddle faithful to not critique the showing too harshly.

“This was just a pickup game,” Kerusch said. “Don’t take this seriously, fans, and don’t be critical, because I know you will. It was just fun.”

Senior forward Steffphon Pettigrew had 11 points, while senior forwards Juan Pattillo and Cliff Dixon each had 10.

But by the time the dunk contest rolled around, it seemed only Kerusch had anything left in the tank.

He worked his way through a field that included Pattillo, junior guard Ken Brown and freshman guard Brandon Peters.

Kerusch defeated Peters in the finals with a dunk where sophomore guard Jamal Crook laid flat on a table in the lane, then tossed the ball up in the air. Kerusch jumped over both Crook and the table, a dunk he said he didn’t run by Ken McDonald beforehand.

Did the dunk scare Ken McDonald a little bit?

All health-threatening dunks aside, Ken McDonald said the Toppers showed the kind of athleticism Friday that can do just as much damage on defense as it can on offense.

“With that athleticism and speed overall, I think we could potentially have a very good defensive team,” he said. “That’s where we really have to have our focus all the time and be consistent with it. It’ll take just a little bit of time, but I’m pretty fired up about the possibilities.”

Kerusch also won the dunk contest during his first year at WKU as a sophomore but was defeated by Pattillo last season.

Even after taking the title back, Kerusch said he isn’t ready to sit on his throne just yet.

“The king will regain his crown after we make it back to the NCAA Tournament,” he said. “That’s when the king can sit down and say, ‘I’m good.'”

There weren’t many outside shots taken during the Toppers’ scrimmage, but Kahlil McDonald introduced himself to the Diddle crowd with a showcase behind the arc.

The junior college transfer from Brooklyn, N.Y., made four of his five 3-point shots and said he was really pleased with the atmosphere.

“I was shocked at how packed it was,” Kahlil McDonald said. “I loved it. I enjoyed myself, and hard work is paying off. I’ve just got to thank God every day that I’m on this new level.

McDonald averaged 23.7 points as a sophomore last season at Blinn College (Texas), but Ken McDonald said the guard is still adjusting to a new level of play.

“He’s a good scorer and a good basketball player,” Ken McDonald said. “He’s got to learn this college level, the high Division I level. I think he’s doing a good job. His family’s in town from New York, so … this was a good start for him.”

Kerusch described Kahlil McDonald, who also competed in the 3-point shooting contest with Lady Toppers junior Vanessa Obafemi, as a “sharpshooter” when he gets going.

“We just have an arsenal of weapons,” Kerusch said. “If you can get with the first five, then you have to worry about the bench.”

Ken McDonald said he woke up at 3:30 a.m. Friday morning, ready to go for WKU’s first of two practice sessions on the day.

Teams weren’t able to officially practice until 5 p.m. local time, but the Toppers saved up enough of their allotted earlier practice time to have two hour-long sessions Friday.

“The energy was really good,” Ken McDonald said. “A lot of skill work in the morning early, and then we came back in the afternoon and competed a little bit. I was happy with the effort.”

Kerusch said he was pleased with the way the newcomers took to the practice routine Friday, as well as the way the veterans led them along.

The Toppers will have their first official practice Saturday morning, according to WKU media relations.

“We know what it takes to get where we want to go,” Kerusch said. “It’s neat seeing the things guys are working on. We’re working on a lot of defense. We want to turn teams over, get up the court and get easy points.”