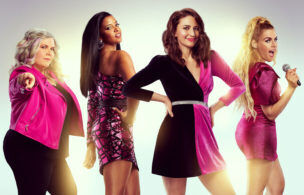 We’re ready to because Girls5eva looks like it’s going to be a blast. Peacock has announced that its new original comedy will drop all eight episodes on Thursday, May 6, releasing a new trailer and poster. See AlsoPeacock Unveils ‘Girls5eva’ First Look Teaser (VIDEO)
Watch the one-hit-wonder girl group from the ’90s give it another go.

Then 20 years pass, and after a young rapper samples their music, the girls reunite to give their pop star dreams another chance. “They may be grown women balancing spouses, kids, jobs, debt, aging parents, and shoulder pain, but can’t they also be Girls5eva?” the logline asks.

As the trailer shows, that won’t be easy. “The messages in our songs are bad,” Dawn points out and is determined to write them “an anthem to things that aren’t perfect but are still great.” What’s not so great, however, are some of their lives after the group. For example, Wickie can only pretend to live a glamorous life; she’s at the airport to work, not to jet off somewhere exotic. Summer’s dreams of joining The Real Housewives haven’t taken her anywhere; she’s tried out eight times.

Watch the trailer below for more.

Will Girls5eva have the biggest comeback in pop music history? We do know that it’s going to be fun watching them try to make it happen.