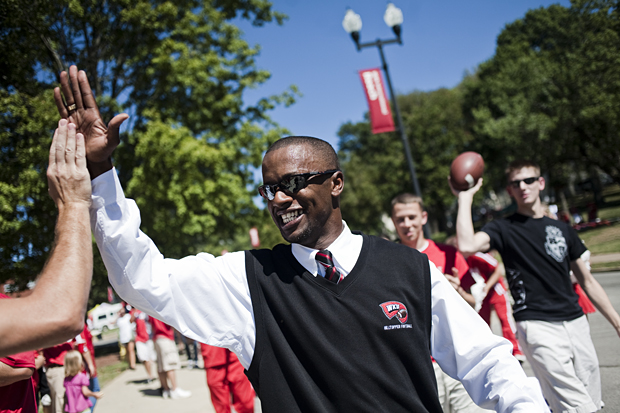 Head Coach Willie Taggart high fives fans on his walk down the hill during the Topper Walk before the opening home game on Saturday against the University of Indiana. Fans tailgated from the top to the bottom of campus in preparation for the game.

After a grueling first four games this season, Head Coach Willie Taggart said he expected to ease into his chair during WKU’s bye week and watch film of an “easier opponent” in Florida International.

But Taggart said he learned quickly that things won’t be any less challenging when the Toppers (0-4) enter Sun Belt play Saturday in Miami.

“It’s not going to be easy,” Taggart said. “You would have thought that after those first four ballgames we had, and I was hoping when I watched the film that it would get a little easier, but it wasn’t that way. That’s part of being Division I — playing big-time ball.”

After losing to Rutgers, 19-14, at home in their first game, the Panthers also dropped contests at Texas A&M, Maryland and Pittsburgh.

That slate earned FIU the 23rd-toughest schedule in the country, according to the latest Sagarin Ratings. WKU’s schedule thus far is the fifth-toughest.

Taggart compared FIU’s speed to that of South Florida, saying they might even be faster.

He said they often opt for an all-out blitz, something the Toppers will have to be ready for.

“You know what they want to do, but it’s just a matter of who’s going to take whose will,” Taggart said. “That’s the only way I know how to play against that. If they’re going to bring it, you’ve got to be the aggressor.”

Sophomore tight end Jack Doyle agreed FIU provides an intense look, and he said the best way to combat that is to focus on the simple things.

“They’re really good and really fast,” Doyle said. “We’re going to have to be really sound in our fundamentals to be successful.”

The Panthers’ quarterback, senior Wesley Carroll, is in his first year of eligibility at the school after transferring from Mississippi State in 2009.

Carroll has completed 84-of-151 passes for 861 yards with four touchdowns this season. He has also thrown five interceptions.

Four different Panther receivers have at least 10 catches this season, led by starting receivers Greg Ellingson and T.Y. Hilton. The two have combined to catch 24 balls for 436 yards this year.

“We’ve got to be able to cover their speedy guys, and if they do catch the ball, we’ve got to tackle,” Taggart said. “Their receivers do a good job of working with the quarterback when he does scramble. You can tell that’s something they practice because they always find a way to get in his vision so he can make a play.”

Sophomore running back Jeremiah Harden has been FIU’s biggest ground threat this season, rushing for 226 yards and a touchdown.

Defensive Coordinator Clint Bowen said the Panthers won’t try to do too much in the rushing game, but that’s all part of their plan. He said it’s evident on film that FIU takes pride in playing within itself.

“They do what their players are capable of doing, and they actually play to their players’ strengths,” Bowen said. “I know it sounds crazy, but there’s a lot of guys that don’t do that in this business.”

Taggart said he sees a little bit of each of WKU’s first four opponents in FIU. He said their defensive pressure reminds him of a mix of Kentucky and Indiana, while their speed and athleticism is comparable to South Florida.

But despite hoping he wouldn’t see it on film, Taggart said the Panthers will be a whole different animal to contain.

“Whenever you’ve seen something, you should always be ready for it the next time,” he said. “Whatever it was they beat you with, you go back and try to get it corrected. But even FIU is different than everyone else because of all the blitzing they do. They’re really fast.

“They blitz safeties, linebackers and corners — they blitz them all.”

Gametime is scheduled for 2:30 p.m. Saturday in Miami.