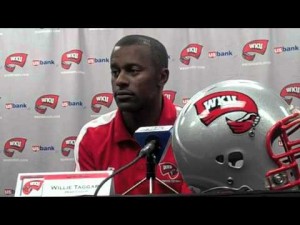 Jakes completed 14 of 31 passes for 193 yards and two touchdowns at FIU. While he had no interceptions, Taggart said his quarterback did miss some throws.

“But I don’t think the receivers helped him,” Taggart said. “Some of those balls that looked like they were overthrown, the receiver stopped running. But there were some balls where it was like, close your eyes and throw it.”

Taggart said WKU’s team isn’t a “circus,” meaning there’s no doubt Jakes is still backed and will start this weekend’s game against Louisiana-Monroe. The first-year coach pointed to WKU’s second-half run back from 21 points down — when Jakes started to use his legs to move to the ball — as a barometer of how well Jakes is capable of playing.

The WKU football team has done a lot of talking about breaking its now-25-game losing streak. One thing players Bobby Rainey and Jared Clendenin pointed out on Monday was that the Toppers have done little to act on all that talk.

Rainey said he and senior receiver Quinterrance Cooper discussed that matter at their apartment after last Saturday’s loss to FIU.

“It doesn’t matter what you say. It’s about your actions,” Clendenin said. “Talk is cheap.”

Clendenin and Rainey both mentioned that the Toppers came out flat in the first half last weekend.

“We need to start the game off like we’re behind 21-0,” Clendenin said. “We play well when we’re behind.”

As is the usual, Taggart didn’t embellish on WKU’s injury situation much on Monday, even when asked directly about safety Mark Santoro.

“I know I don’t elaborate a lot on injuries, but those guys can’t help us,” Taggart said. “I’ll talk about the guys who will be able to help us.”

Cooper also tweeted Sunday that he’s scheduled for an MRI on Monday.