Toppers greeted at airport by hundreds after win 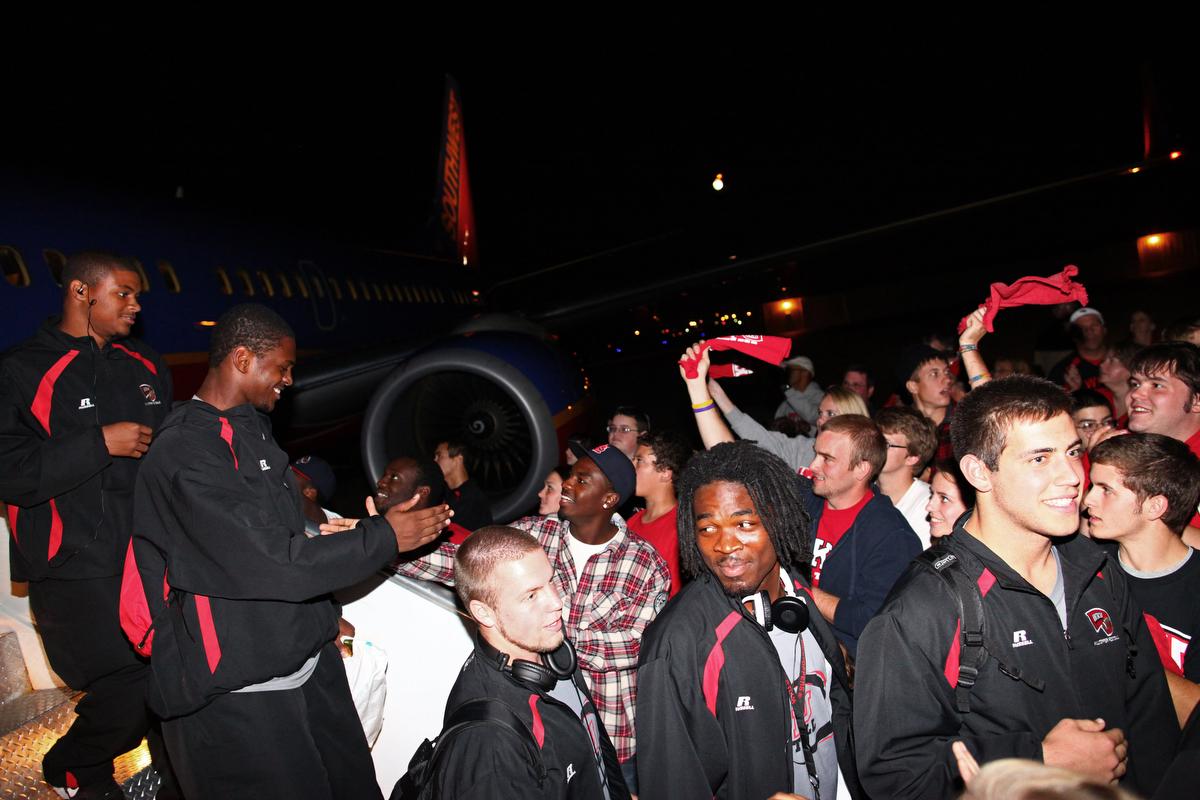 The WKU football team is greeted by a cheering crowd at Bowling Green Regional Airport following its first win in 26 games, Saturday, Oct. 23, 2010.

There were no fires in the street, no cars flipped over, no shirtless men climbing lightpoles.

That didn’t mean it wasn’t quite a scene Saturday night in Bowling Green after WKU captured its first victory in 27 games.

The Toppers were greeted at Warren County Regional Airport by hundreds of fans, who overflowed the lobby even 30 minutes before the Toppers’ plane landed. Head Coach Willie Taggart came down the steps fist pumping to loud cheers and chants of “T-O-P-S, Tops, Tops, Tops.”

Taggart expressed hints of frustration this week with how the season had gone so far. That wasn’t evident as he was flanked by his family on the tarmac.

“I tell you what, for me, this was like the 2002 national championship game,” Taggart said. “Its like our big win out at USC with Stanford. We came home to a big crowd.”

The frustration from the community wasn’t evident Saturday night. The parking lot at the airport was full, so cars parked on the grass for a chance to greet the Toppers.

Due to Friday’s Board of Regents meeting, President Gary Ransdell didn’t make the trip to see the Toppers’ win over Louisiana-Lafayette. He instead greeted the Toppers with plenty of others.

“I think the commanding win tonight breathes energy into the program and into the campus as well with homecoming coming up,” Ransdell said. “People have been behind this team, they just wanted some reason to feel good and have confidence and celebrate for a change.”

And celebrate they did.

There were hugs and smiles all around at the airport. Once the Toppers returned to campus, there were fireworks along with the WKU pep band playing the fight song.

Lizzie Correa, girlfriend of junior safety Ryan Beard, stood in the airport lobby waiting for the team. Like plenty of other significant others, Correa has been there through all 26 losses.

Correa said Beard described the feeling with three words after the game: ecstatic, relieved and speechless.

While Correa wished the win took place at Houchens-Smith Stadium, she was there ready to celebrate.

Senior wide receiver Quinterrance Cooper, who tweeted week after week that WKU was going to “Shock da world,”  summed it up quickly.

“It feels like we just won a championship, but we know we have plenty more to go,” Cooper said. “It’s really so emotional, I can’t put it into words.”

Athletics Director Ross Bjork presented the team a game ball in Lafayette following the game, telling the Toppers they could only take the ball if they were committed to the next step.

Bjork said he reminded Taggart this week that his career wasn’t going to be defined by six games, also telling him to stay the course and success would happen.

Defensive coordinator Clint Bowen joined the staff after spending more than a decade as an assistant coach at Kansas. Bowen came to WKU with a steep challenge of turning around a defense that ranked near the bottom of every statistical category last season.

“This is great for our kids. They’re playing with a heavy burden,” Bowen said. “For them to get that win they probably deserved last week — that got bumped back a week — it’s great for these kids.”

Assistant coach Walter Wells remained on staff when Taggart was hired and has been through all 26 losses.

Senior offensive lineman Preston King — along with the rest of the line — made a vow that they wouldn’t speak with the media until the Toppers won.

To say the least, King broke his silence quickly after the game.

“It’s a great win for the university, the town, all the players, the coaches and everybody,” King said. “It was one of those games everyone was looking to.”

Now WKU turns its attention to a homecoming matchup Saturday against North Texas. For a change from the past couple years, they’ll look to extend a new streak — a winning streak.